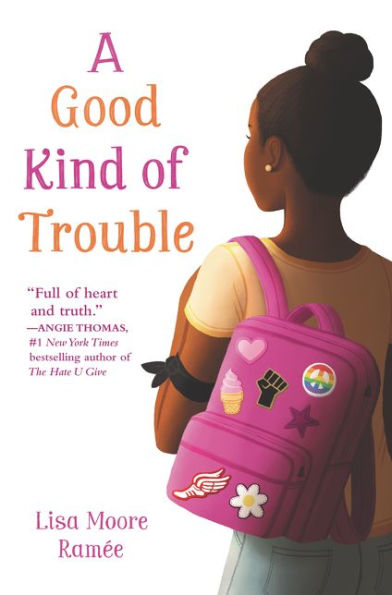 “It’s hard, but you can’t always worry about what everyone else thinks. It’s important to decide what you believe in and stick with it,” Ms. Jacobs. –A Good Kind of Trouble

A Good Kind of Trouble

Twelve-year-old Shayla is allergic to trouble. All she wants to do is follow the rules. (Oh, and she’d also like to make it through seventh grade with her best friendships intact, learn to run track, and have a cute boy see past her giant forehead.)

But in junior high, it’s like all the rules have changed. Now she’s suddenly questioning who her best friends are and some people at school are saying she’s not black enough. Wait, what?

Shayla’s sister, Hana, is involved in Black Lives Matter, but Shay doesn’t think that’s for her. After experiencing a powerful protest though, Shayla decides that some rules are worth breaking. She starts wearing an armband to school in support of the Black Lives Matter movement. Soon, everyone is taking sides and she is given an ultimatum.

Shayla is scared to do the wrong thing (and even more scared to do the right thing), but if she doesn’t face her fear, she’ll be forever tripping over the next hurdle. Now that’s trouble, for real.

Told from Shayla’s point of view, A Good Kind of Trouble effectively explains the Black Lives Matter movement and Shayla’s budding awareness of political activism. When Shayla and her friends begin junior high, they struggle with the changes that come with growing up—crushes, changing friendships, and figuring out their own beliefs.

Readers will relate to Shayla as she struggles with the difficulty of junior high. Shayla’s teacher assigns an “eyeball journal” so students can write down their observations. As Shayla writes in the journal, her thoughts and emotions come to the forefront, which allows the reader to connect with Shayla on a deeper level.

As the story explains the Black Lives Matter movement, most of the information is introduced as Shayla’s parents listen to news about a trial where a black man was killed by a police officer. Shayla’s parents and several adults talk about the trial, but the events are not described in detail. Even though the story focuses on how African-Americans are unjustly stereotyped, the story also touches on how other races are also stereotyped. Shayla’s friends are different races—Isabella is Latin and Julia is Asian.

Throughout the story, Ramée incorporates quotes from famous people, such as author Ralph Waldo Emerson. Shayla’s parents and teachers also give positive advice. For example, one teacher says, “You can be different from the generations before you. You can celebrate people’s differences. Or step up and challenge beliefs you know are wrong.” As Shayla explores her own personal beliefs, she thinks about everyone’s opinions and applies them to her own life.

“It’s hard, but you can’t always worry about what everyone else thinks. It’s important to decide what you believe in and stick with it,” Ms. Jacobs. –A Good Kind of Trouble