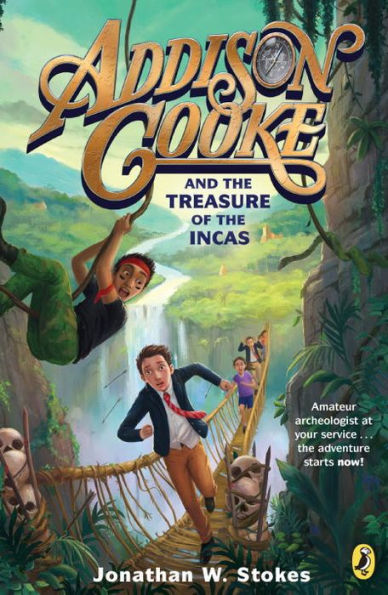 “Books are the answer to everything,” Addison said.  —Addison Cooke and the Treasure of the Incas

Addison Cooke and the Treasure of the Incas

Twelve-year-old Addison longs for adventure, but his aunt and uncle, both respected curators at the New York Museum of Archaeology, always leave Addison home when they travel the world to find hidden treasures. When Addison’s aunt and uncle discover an ancient Incan key that leads to treasure, they are kidnaped by the evil Russian Professor Ragar.

Addison convinces his sister, Molly, and two of his friends to set off to South America on a mission to rescue his aunt and uncle. Once they arrive, they find adventure, danger, and booby-traps. Can Addison and his team find the treasure, outsmart Professor Ragar, and save his family?

This fast-paced adventure takes readers on an epic journey through South America. Addison, who is eccentric and optimistic, leads his friends into one dangerous situation after another. Although the group is often in danger and narrowly escapes death several times, the events are often humorous. Even though the group is young, they are able to figure out ancient clues, outsmart Professor Ragar, and escape mercenaries.

Full of mystery, suspense, and evil villains, adventure seekers will keep turning the pages of Addison and the Treasure of the Incas. Young readers will learn about the conquest of Pizarro as they follow the exciting travels of Addison. However, the story is not always historically accurate, and the path the kids take is geography inaccurate. Despite these inaccuracies, the story will pique middle graders’ interest in the Ancient Incan Society and increase their love of reading.

The publisher recommends this book for children as young as eight. Although younger children may enjoy the story, the length of the book and the complexity of the writing would make Addison and the Treasure of the Incas difficult for beginning and struggling readers.

“Books are the answer to everything,” Addison said.  —Addison Cooke and the Treasure of the Incas