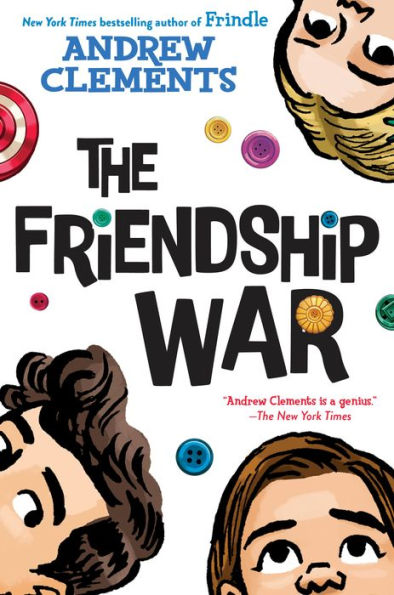 “Maybe I don’t need a best friend right now. Maybe I just need a better one,” Grace. –The Friendship War

Grace and Ellie have been best friends since second grade. Grace doesn’t mind that Ellie always gets her way and is always the center of attention. When it comes to Ellie, Grace is used to tagging along and doing what Ellie wants.

Everything changes when Grace shares part of her button collection at school, and accidentally starts a new fad. Soon students in her grade, and then the entire school is trading and fighting over buttons. Grace has always been okay with fading into the background, but when button fever hits her, she just has to have the button with a blue pinwheel. Soon Grace and Ellie argue over a button, and it looks like their friendship might just be over. Button collecting may have cost Grace one friend, but it also leads her to a new one—Hank, the biggest button collector in the sixth grade. Is there any way the two new friends can figure out how to stop the button craze?

Readers will relate to Grace, who connects to the world through math. Grace is always counting, collecting, and overthinking. Her unique flaws and the way she connects with others will give readers a unique perspective as well as show how people with different personalities and interests can still be friends. Throughout the book, readers will learn new words because Grace explains several scientific words and ideas. The vocabulary is so ingrained into the plot that learning new concepts never feels like a school lesson. Learning about science, math, and the history of buttons has never been so much fun!

Another positive aspect of the story is Grace’s strong relationship with her family, who understands her crazy collections. Her family relationships extend to her grandfather, who writes letters and texts to Grace. Scattered throughout the story are conversations about Grace’s recently deceased Gramma, which gives insight into the grieving process.

The Friendship War, which is written by the same author of Frindle, is a fast-paced story that highlights the complicated nature of friendship. Through Grace’s experiences, the reader will learn not only the value of friendship but also how friendship should not be one-sided. At one point, the school principal tells Grace, “It’s a great thing to have one good friend, but to have two looking out for you? That’s nothing short of wonderful.” The story also highlights the importance of forgiveness and taking responsibility for your actions. The Friendship War is a highly entertaining story that not only shows the family in a positive light but is also packed with life lessons that are so ingrained in the story that the message is never preachy.

“Maybe I don’t need a best friend right now. Maybe I just need a better one,” Grace. –The Friendship War