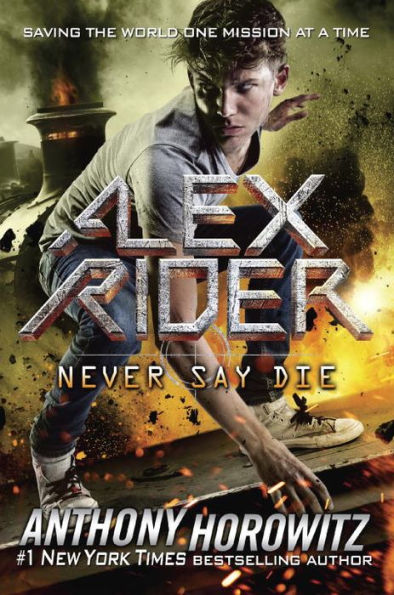 Alex is now living in San Francisco, trying to recover from the tragic death of his caregiver, Jack Starbright. Alex was forced to watch Jack’s murder at the hands of terrorists working for SCORPIA.  With Jack gone, Alex struggles to find his place. When he gets an unexpected and cryptic email, he’s sure it’s from Jack. In an attempt to prove that Jack is alive, Alex boards a flight to Egypt and begins searching for clues to Jack’s whereabouts.

Alex’s story jumps from Egypt to France to Wales. As Alex searches for Jack, he comes face to face with twin brothers, who plan to kidnap the children of the wealthiest citizens of the world. Soon Alex is caught up in a tangle of intrigue that may lead to his death.

Packed with action, unexpected twists, and a mystery, Never Say Die will catch readers’ interest from the very first page. Alex is a strong character, who uses his brains to get out of difficult situations. The story descriptions will carry the reader into Alex’s world—a world that is often filled with fear. The evil twins and the people who help them are vicious criminals who have no problem murdering anyone that is perceived as a threat. Their willingness to kill and the violent descriptions of the creative ways they murder may cause some readers to have nightmares. Anthony Horowitz tells an engaging story that deals with terrorists, murder, and kidnapping.