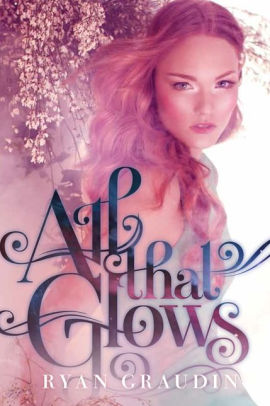 Emrys, a fiery Faery, was sent to London to guard the prince from the Old One who is out to destroy the crown.  Emrys is to guard Prince Richard, “Britain’s notorious, partying bad boy and soon-to-be king.”  Richard’s wild ways attack soul-feeding Green Woman, but also Emrys.

In a move that goes against every Faery rule, Emrys reveals herself to Richard and finds herself falling in love with the mortal.  Now she is in a fight against time to discover who the Old One is so she can keep Richard safe.  And if she can keep him safe, she will have to make the ultimate choice—loving Richard or keeping her magic.

All that Glows is an entertaining story that has suspense, love, and intrigue.  Although others see Richard as an unruly party boy, the reader gets to see the side of him that is unsure and lonely.  As the novel progresses, Richard becomes more and more likable as he grows out of his boyhood partying ways and into a man worthy of being king.

There are several fights between Green Woman and Emrys, and the story ends with a final battle between the faeries.  These scenes add suspense and the reader is allowed to imagine these scenes unfolding since they are described without graphic or gory details.  Like the fight scenes, the love scenes are also tame.   Richard and Emry kiss and Emrys admires Richard’s physique, and although there is sexual longing, the two do not act on this desire.

All That Glows is an excellent story.  However, there is a fair amount of scenes that revolve around clubbing, alcohol, and sexual desire that may be inappropriate for younger readers.