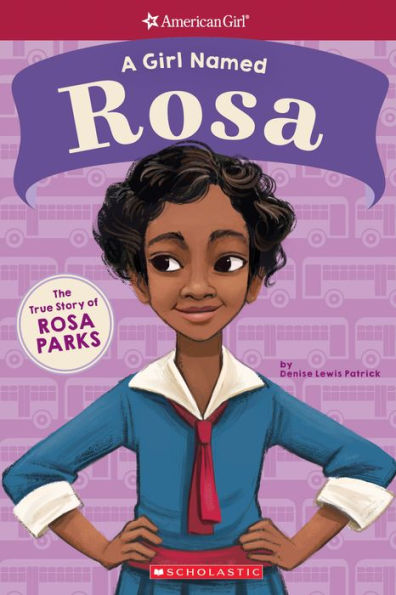 When Rosa Parks was a young girl, she had to walk to school. Only white children were allowed to ride the bus. Every day, Rosa saw how African Americans were treated unfairly. Everything was segregated—schools, churches, even drinking fountains. During this time, Rosa’s grandfather “taught her to not be afraid of the dangers or hardships she might face.”

When Rosa grew up, she became a part of the National Association for the Advancement of Colored People. She wanted to help change unfair laws. Then, when riding a bus she was told to give up her bus seat to a white person. She decided the time had come to stand up for fairness by staying seated. What happened next changed America.

A Girl Named Rosa shows how a peaceful protest can lead to important changes in the world. Rosa’s courage helped other African Americans speak up. Rosa’s refusal to give up her seat encouraged others to boycott the bus system, which eventually leads to the end of bus segregation. While the biography teaches about Rosa’s life, the text doesn’t contain any direct quotes from her.

Rosa’s life is described through text and large, full-color illustrations. Each two-page spread has a full-page illustration and one page of oversized text. Some words appear in bold letters and are in a glossary at the back of the book. The end of the book also has a timeline of Rosa’s life, pictures of Rosa and boycotters, and a short article about a girl named Marley who searches for books that portray black girls in a positive light.

Everyone can take inspiration from Rosa’s story. In today’s world, Rosa’s story of courage can help inspire others to demand justice for all people, regardless of their race. Rosa’s story shows that injustice can be overcome. Even though the book’s format will appeal to younger readers, they may struggle with the difficult vocabulary. However, the short chapters make A Girl Named Rosa a good choice to read aloud. Older readers who want to explore more books about racial injustice should read A Good Kind of Trouble by Lisa Moore Ramée.