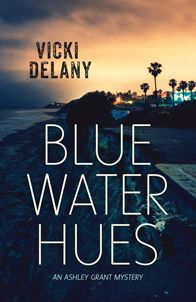 Paramedic Ashley Grant moved to a Caribbean island hoping for a laid-back life. When Ashley responds to a fire at a beach resort, she recognizes the victim. The victim’s cousin, Darlene, pleads for help. But there are people who don’t want the two women asking questions. As Ashley learns more about the murder, she becomes a target herself. Will Ashley be able to learn the truth or will she be silenced forever?

Blue Water Hues is a solid mystery that takes the reader into the heart of Ashley’s investigation. Darleen takes Ashley around the small Caribbean island where Ashley finds plenty of people to question. The fast-paced story keeps the reader guessing until the very end. Many of the characters are fearful, and they do not want Ashley digging into the murder. This fear adds suspense and leaves the reader guessing until the very end.

Blue Water Hues is part of Orca Publishers Rapid Reads collection. Readers who do not have a lot of time will find the story’s straightforward plot, easy vocabulary, and interesting characters the perfect fit. Since the story is only 160 pages, the characters are not well developed. However, the mystery drives the story and will keep the reader entertained.