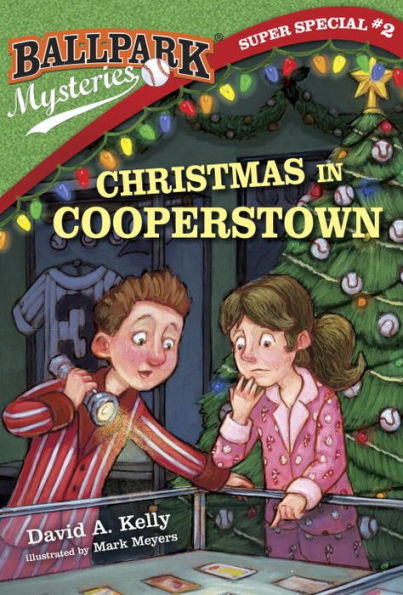 Mike and Kate volunteer to wrap presents for charity. As they are wrapping gifts, they get an unexpected invitation to stay the night at the Baseball Hall of Fame. At the special thank-you sleepover, Mike and Kate decide to explore. As the kids creep through the dark museum, Mike uses his special flashlight and discovers that one of the famous baseball cards on display is a fake. Can they find the real card, catch the crook, and get the presents to the charity’s Christmas party on time?

Christmas in Cooperstown highlights the importance of helping others. Mike and Katie aren’t the only young helpers. One of the young helpers celebrates Hanukkah, and another one celebrates Ramadan. The kids briefly mention their holiday traditions. Despite their different beliefs, they all come together to help those in need.

Like the other books in the series, Mike and Kate follow the clues to solve the mystery. However, the list of suspects is small. In the end, they discover that one of the volunteer workers took the card hoping the Baseball Hall of Fame would give a reward for its return. The volunteer “was trying to play Robin Hood, taking from the Hall of Fame to give to the community center.” In the end, several of the baseball players donate money to help build the community center.

Christmas in Cooperstown is an easy-to-read story that has a simple plot. Black and white illustrations appear every 2 to 5 pages. Most of the illustrations are a full page and they help readers visualize the characters as well as help them understand the plot. The book ends with Dugout Notes which includes eight pages with facts about Cooperstown and the National Baseball Hall of Fame. Even though Capital Catch is the #13 book in the series, the books do not build on each other, so they can be read out of order. The Ballpark Mysteries do not need to be read in sequence to be enjoyed.

Christmas in Cooperstown mixes baseball, mystery, and community service into an enjoyable story. Sports fans who want a humorous sports story should add Baseball Blues by A.I. Newton to their reading list.