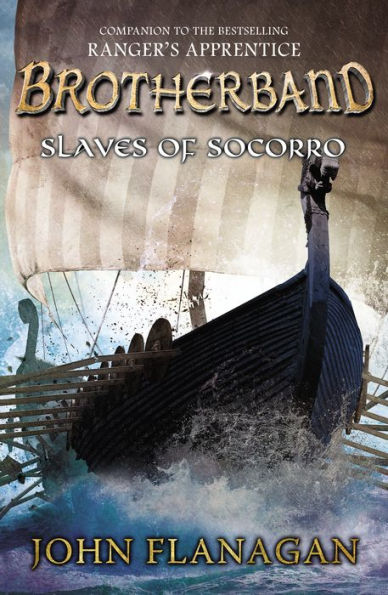 Hal and his fellow Herons return home to Skandia after defeating the pirate captain Zavac and reclaiming Skandia’s most prized artifact, the Andomal. With their honor restored, the Herons turn to a new mission: going to Araluen. But soon after they arrive, news comes of a Skandian wolfship attacking a village and enslaving twelve people.

With the help of the ranger Gilan, the Herons set off to track down Tursgud—leader of the Shark Brotherband and Hal’s constant opponent. Tursgud has turned into a pirate and a slave trader, and the Herons are determined to save the twelve Araluen villagers from him. The Heron crew sail into action. But finding Tursgud and freeing the slaves proves more difficult than the Herons ever imagined.

The Slaves of Socorro begins slowly, as it starts with the Herons returning home. When they are given a mission, the Herons travel to Araluen. Along the way, they see Tursgud’s ship and give chase, but Tursgud is able to slip away. Determined to find Tursgud, the Herons travel to Socorro. This causes the first half of the book to lack action and suspense, and readers will be glad when the Herons finally arrive at their destination.

The pace picks up in the second half of The Slaves of Socorro. Flanagan vividly builds the world of Socorro, which adds interest to the story. As the Herons come up with a plan to free the Araluens, Ingvar agrees to pose as a slave. His imprisonment shows his willingness to make sacrifices for strangers. Ingvar’s kind nature and loyalty are admirable. The Herons also highlight the importance of working as a team, as well as embracing each person’s strengths.

Fans of the Ranger’s Apprentice Series will cheer as Gilan joins the Herons on their mission. However, fans will be frustrated when several scenes depict Gilan in an uncharacteristic way. Gilan is not the only new character added to the story. Kloof, a misbehaving dog, joins the crew and adds humor to the otherwise serious story.

In typical Flanagan style, the book concludes with an epic battle that is somewhat bloody. Tursgud and his crew all die; however, their deaths are not celebrated. Even though many people die at the hands of the Herons, they intentionally try to disable their enemies instead of killing them when possible.

Slaves of Socorro may start off slowly, but the second half of the book is full of action as the Herons save the Araluens from slavery. The story’s difficult vocabulary and detailed sailing scenes make the Brotherband Series best for strong readers. Readers will enjoy the friendship between the Herons, Thorn’s gruff behavior, and the unexpected plans that Hal comes up with. Readers will be eager to begin the next book in the series, Scorpion Mountain, which will add another character from the Ranger’s Apprentice Series.