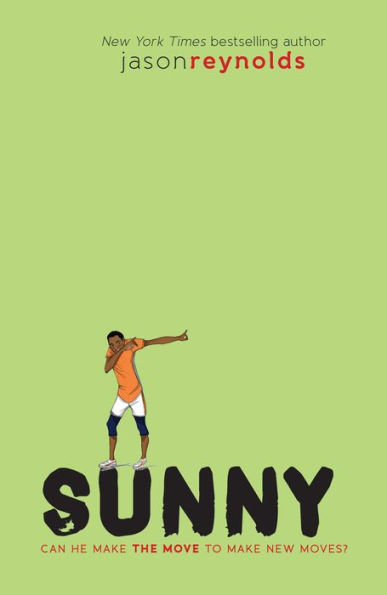 Sunny is a murderer. At least that’s what he thinks. Sunny’s mother died giving birth to him. To make matters worse, Darryl (his dad, who makes Sunny call him by his first name) acts like everything Sunny does is wrong. The only time Sunny feels like he is doing something right is when he wins races. Sunny is the number one mile-running champ at every track meet, but he doesn’t care about that. Actually, he hates running…but Sunny runs because it seems like the only thing Sunny can do right in his dad’s eyes is to win first place ribbons running the mile, just like his mom did. When Sunny stops running mid-race one day, he puts forth his first step into reclaiming his own life and making amends with the tragedy of his mother’s death.

With the growing conflict with his father, Sunny needs his friends on the track team more than ever.  Sunny discovers a track event that encompasses the hard beats of hip-hop, the precision of ballet, and the showmanship of dance as a whole: the discus throw. But as he practices for this new event, can he let go of everything that’s been eating him up inside?

Told through Sunny’s diary entries, the third installment in Defenders Track Team series explores Sunny’s transition from long-distance runner to discus-thrower. When he begins letting his mother’s running dreams go, Sunny finally starts on his journey towards finding his own rhythm. Sunny is a story about grief, forgiveness, honesty, and letting go of the screams within. Discus allows Sunny to let go of his mother’s running dreams so he can become his own person.

Sunny’s diary entries reveal his pain and emphasize that he feels very much alone in the world. Despite his generally “sunny” outlook, Sunny and his father’s emotional relationship is most poignant in the story. Their shared moments of grief humanize them, and the end of the book shows the beginning of their healing process in their relationship and in their shared trauma over Sunny’s mother’s death. In the end, the world isn’t perfect for Sunny, but he finds a certain peace within himself as he is able to release the emotions he’s been bottling up.

The supporting cast is a small, but powerful force in Sunny’s life. Sunny’s homeschool teacher, Aurelia, has a lighter, sillier personality that contrasts with Darryl’s relatively stony demeanor. Both are important parental figures for Sunny. Coach Brody and Sunny’s teammates, Lu, Ghost, and Patty provide their friend with unconditional support. They even encourage Sunny when he chooses to take up discus rather than run. Sunny’s diary entries show that he cares deeply about those in his life as well. These characters help bring out Sunny’s uncompetitive and kind nature, and these traits make it easy to root for his success.

Sunny is thought-provoking, and the novel’s strength lies in Reynolds’s ability to develop interesting characters. The descriptions of Sunny learning how to dance and throw the discus are fun, and they blend well with his unique narration style. Sunny is a compelling read because it builds on the already diverse, emotionally intelligent world that Reynolds created in the previous two books. Sunny reinforces that the support of friends and family make all the difference in someone’s journey, but that there’s only one person who can take that first step to make the change.