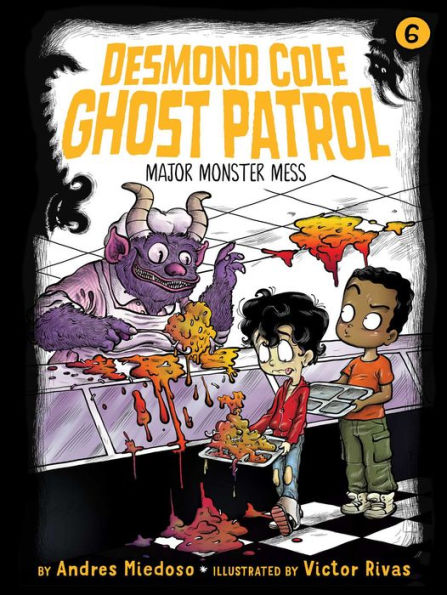 Andres Miedoso is not like that at all. He is Desmond’s best friend and ghost patrol partner. Desmond Cole loves the cafeteria food, but Andres always brings his lunch. Unlike most schools, the lunch at Kersville Elementary is great. Desmond always has a plate heaping with food. When a cafeteria worker smells Andres’ lunch, strange things begin happening. Andres soon wonders if a monster is after his lunch.

In the sixth installment of the Desmond Cole Series, Andres takes center stage as he tries to find out why he comes home smelling like a monster. Another conflict is introduced when a shadow keeps trying to take Andres’s lunch, which is made up of traditional Hispanic foods. Major Monster Mess has a lot of aspects that will have younger readers turning the pages. Besides featuring a ghost that lives in Andres’s basement, there is also the threat of monsters, as well as the mystery of the shadow. As usual, Desmond and Andres discover that there is little to fear when it comes to monsters. Even though they may have scary appearances, they have good intentions—to cook the students of Kersville a delicious lunch.

The Major Monster Mess has a unique and humorous plot that has mystery and a satisfying, unexpected conclusion. The story contains just enough gross factor and scary monsters to keep readers turning the pages. Even though The Monster Mess is the third book in the Desmond Cole series, readers do not have to read the previous book. The story is told in ten short chapters with easy-to-read vocabulary; perfect for emerging readers. A black-and-white illustration appears on almost every page. The often humorous illustrations use exaggerated facial expressions so readers can tell what the characters are feeling. Readers will laugh as Desmond and Andres find themselves in unexpected situations. Readers who enjoy The Scary Library Shusher should also try the Notebook of Doom series by Troy Cummings.