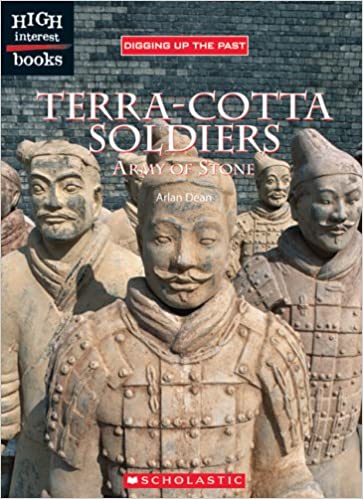 Emperor Qin Shi Huangdi, China’s first emperor, was not a popular ruler. Despite this, he was able to unify China’s seven states. He also passed laws to standardize written languages, currencies, weights, and measurements. While these laws helped China build strong trade, Emperor Qin Shi Huangdi is best known for his tomb which is guarded by terra-cotta soldiers. The tomb has about eight thousand terra-cotta statues, including individual soldiers and their horses. Terra-Cotta Soldiers: Army of Stone describes the archaeological discovery of thousands of life-sized terracotta warrior statues in northern China in 1974 and discusses the emperor who had them created and placed near his tomb.

Terra-Cotta Soldiers: Army of Stone will appeal to reluctant readers for several reasons. The text is printed in large font and is broken into small, manageable parts. Most of the two-page spreads have text on one side of the page and a large picture on the other side of the page. Readers will be captivated by the pictures of the soldiers and the paintings of Emperor Qin Shi Huangdi. Throughout the book, there are also two to three sentences describing some of the artifacts found in the tomb. The end of the book has a glossary as well as a short list of other books that readers may want to explore.

Anyone who is interested in history will enjoy Terra-Cotta Soldiers: Army of Stone because the text is both engaging and easy to read. The book includes an interesting mix of Emperor Qin Shi Huangdi’s cruelty and the emperor’s positive impact on China. The pictures of the terra-cotta soldiers are breathtaking and the history behind them will fascinate readers. Whether you’re writing a research paper or just interested in history, Terra-Cotta Soldiers: Army of Stone is an excellent book to start with because even though the book packs in a lot of facts, it doesn’t read like a history book.