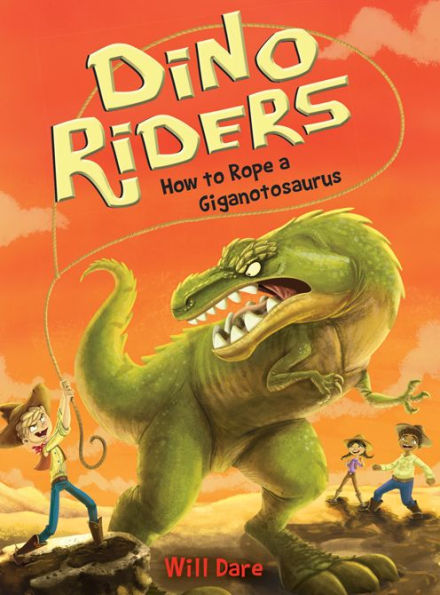 Josh admires the legendary dino wrangler Terrordactyl Bill, who just captured a T. rex. Josh knows that he can be the next great dinosaur cowboy. In order to be like Terrordactyl Bill, Josh wants to capture his own giant dinosaur. Finding a T. rex can’t be done, but Josh, with the help of his friends, can nab a giganotosaurus. With a little bit of luck and a whole lot of rope, can Josh prove he has what it takes to be the best dino rider in The Lost Plains?

Whether reading this as part of the series or reading the story as a stand-alone, How to Rope a Giganotosaurus will engage younger readers with an easy-to-read story and fun illustrations. The second installment of the Dino Riders series will captivate readers because of Josh’s friendships, his daring spirit, and his desire to be great. Similar to the first book in the series, the story has several scenes that contain dino dung and dino slobber. Josh and his friends even cover themselves in dino dung and dino feathers. Although the bully is a bit stereotypical and the conclusion is far-fetched, that doesn’t take away from the book’s enjoyment. Anyone who enjoys adventure and dinosaurs will find How to Rope a Giganotosaurus fun to read.