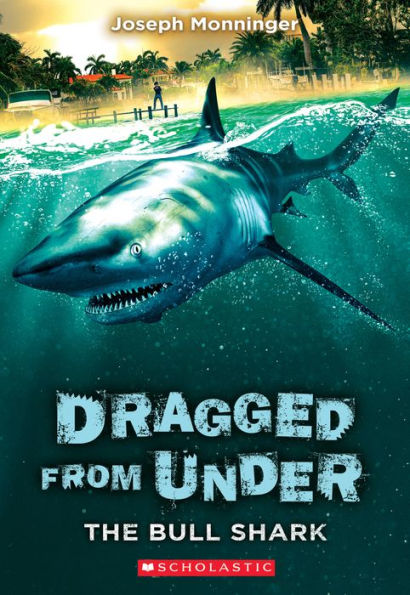 When the ominous theme song to Jaws plays on his cell phone, fish-obsessed sixth-grader Barn Whimbril knows a shark attack has been reported. Barn tracks attacks all over the world. But this time, it’s right in his own backyard—a series of canals near coastal Florida. As more sightings of these aggressive bull sharks occur in the area, Barn sets out to investigate. Can Barn figure out what has brought these sharks to a once quiet part of his state before another attack occurs?

Full of nonstop action and adventure, Dragged from Under: Bull Shark starts off with a deadly shark attack. The story is told from Barn’s point of view, which allows the reader to learn interesting shark facts without the information sounding like a biology lecture. Barn is awkward around Margaret because she’s a girl, and he’s surprised that a girl could also be interested in sharks. Barn is an extremely likable character. He’s obsessed with sharks, smart, and a little odd. Even though Barn knows he’s different than other kids his age, he doesn’t try to change who he is.

Barn isn’t the only likable character. The large cast of supporting characters are unique and interesting as well. Barn is surrounded by positive adults, who encourage him to be careful, as he investigates the shark attack. Many of the adults, including Jessup who works for Fish and Game, acknowledge Barn’s knowledge and listen to his ideas. Instead of discounting the adults around him, Barn listens to their advice and shares his ideas with them.

Dragged from Under: Bull Shark will engage middle school readers as it teaches how human behavior can cause wildlife to act differently. Even though sharks are dangerous, they are not portrayed in a negative light. Several chapters have the shark’s perspective, which allows readers to understand that the sharks were just doing what sharks do—searching for food.

Shark lovers will want to add Dragged from Under: Bull Shark to their must-read list. The Shark Whisperer series by Ellen Prager and Extreme Adventures: Shark Bait by Justin D’Ath will also take shark-loving readers on a bunch of adventures under the ocean.