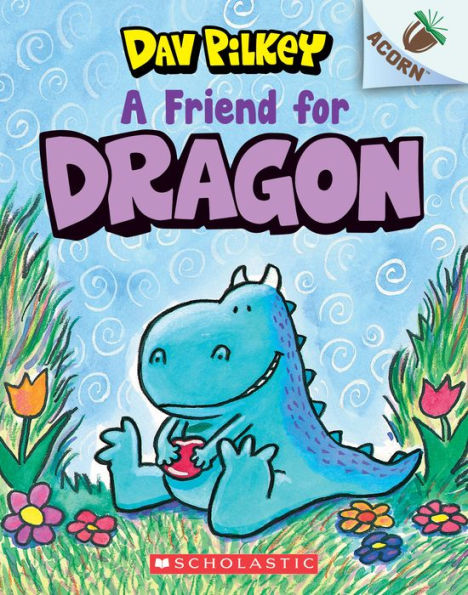 At the beginning of the story, Dragon is looking for a friend. When an apple falls from a tree, landing on the lonely dragon, a snake decides to play a trick on Dragon. The snake makes Dragon believe that the apple can talk, but when Dragon takes the apple home, the apple stops talking. The apple’s silence worries dragon who takes him to the doctor. The doctor eats the apple, leaving behind a core that soon rots. Dragon must bury his friend, who he misses deeply. But in the spring, dragon goes for a walk and finds a new apple to be friends with.

Written using simple sentences, with easy vocabulary, A Friend for Dragon is perfect for those transitioning to chapter books. Seven or fewer sentences appear on every page, and every page has colorful pictures that will help readers visualize the plot and bring Dragon’s friendship with the apple into sharp focus. Dragon tells his friend stories, jokes, and even makes him a midnight snack. Dragon also talks about the qualities that make a good friend.

Readers may find A Friend for Dragon entertaining or heartbreaking depending on their unique personalities and experiences. Some readers may think that the snake’s joke is funny because obviously, an apple would not make a good friend. But other readers may walk away saddened by the snake’s joke, especially because Dragon is so lonely. The snake’s joke is never revealed and in the end, Dragon finds a new apple to take his friend’s place. Dragon deeply mourns the loss of the apple and even buries him. An illustration shows Dragon grieving over the apple’s tombstone.

While Dragon is a lovable character, some may find A Friend for Dragon upsetting. Dragon demonstrates the qualities of a true friend, as well as highlights the fact that it is okay to mourn the loss of a friend. The story definitely brings up topics that parents should discuss with their children. A Friend for Dragon has an easy-to-understand plot that many readers will find enjoyable, while others may become saddened by Dragon’s experiences.