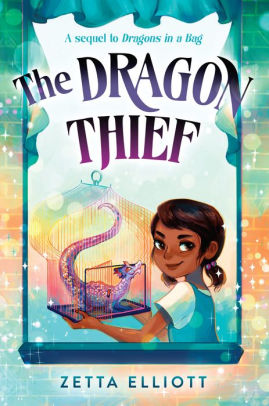 Jaxon had just one job—to return three baby dragons to the realm of magic. When he got there, only two dragons were left in the bag. His best friend’s sister, Kavita, is a dragon thief!

Kavita only wanted what was best for the baby dragon. Now every time she feeds it, the dragon grows and grows! How can she possibly keep it secret? Even worse, stealing the dragon has upset the balance between the worlds, and the gates to the other realm have shut tight! Jaxon needs all the help he can get to find Kavita, outsmart a trickster named Blue, and return the baby dragon to its true home.

The sequel to Dragons in a Bag continues Jaxon’s story; however, many of the characters from the first book only make a very brief appearance. Instead, The Dragon Thief jumps back and forth between Jaxon’s and Kavita’s points of view. Jaxon and Kavita both want to return the dragon to the realm of magic, but they don’t work together until the very end. Much of the story focuses on both Jaxon and Kavita trying to figure out how to return the dragon. With talking animals, magic, and a cast of helpful characters, the story has many interesting elements.

Readers may be disappointed that the dragon rarely appears in the story. However, several new characters add interest to the story. Jaxon meets a feisty fairy and gains the help of a classmate. At one point Jaxon thinks, “A week ago, a talking pigeon would have freaked me out. But over the past few days, I’ve encountered a very determined squirrel, actual dinosaurs, a talking rat, and three baby dragons. I’ve learned to take it all in stride.”

The Dragon Thief hints at some important themes, but they are undeveloped. Several times the story mentions slavery and freedom, but the information is not integrated into the story and seems random. Jaxon’s family only appears at the end of the story, but he thinks, “This is my family. Sure, we’re different from other families. Ma’s a witch, and I’m her apprentice. Mama’s a widow, and Trub’s reformed thief. We’ve all made mistakes—big and small—but we stick together because that’s what you do when you love someone.”

The Dragon Thief has some interesting elements, but the undeveloped plot will leave readers with many questions. One positive aspect of the story is that both Jaxon and Kavita are diverse characters who want what’s best for the dragon. Overall, The Dragon Thief has enough mystery and magic to interest fantasy fans, but the abrupt ending and the many characters may confuse some readers.