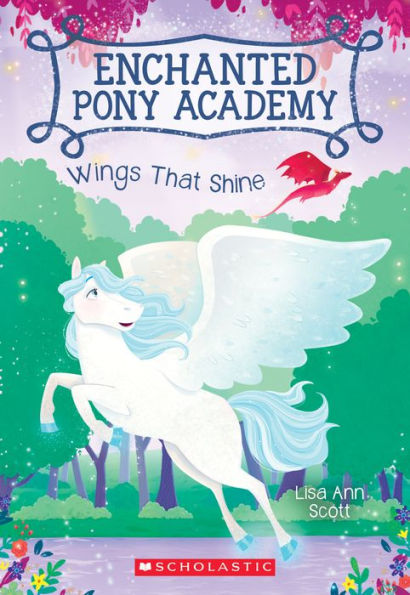 Skydancer is entrusted with the school’s special medal. When she gets distracted, she drops the medal, and is afraid to tell anyone. While she is looking for the medal, she finds a sick dragon. Skydancer returns to the school and finds another dragon. The dragon doesn’t want to hurt anyone, but everyone is afraid of her.

When she stumbles upon a dragon at the edge of the Enchanted Pony Academy grounds, Skydancer is terrified. Skydancer is the only one who can talk to any animal with wings—a very useful Glitter Gift, and one she has always enjoyed. Can she be brave enough to use her Gift and convince the dragon to go away. . . before everything goes up in flames?

The story’s plot focus on both the lost medal and the dragon’s need for help. Despite the danger, Skydancer helps the dragon. Even though there is little suspense, younger readers will enjoy Skydancer’s adventure into the dragon’s home. Even though most of the pegaponies hide from the dragons, Skydancer is determined to help them. Both the dragons and Skydancer learn that their conflict could have been solved if everyone was able to communicate. Skydancer’s experiences highlights the importance of communication and honesty.

Wings That Shine has relatable conflicts. Readers will empathize with Skydancer, who is afraid to tell the headmistress that she has lost the medal. Even though Skydancer is afraid, she still tells the headmistress about the lost medal. However, instead of having any negative consequences, with magic the medal is returned to its proper place.

Wings That Shine will entertain those who have already transitioned to chapter books. Cute black and white illustrations help break up the text and appear every three to five pages. Although the vocabulary isn’t difficult, the text-heavy pages and long sentences may be overwhelming for beginning readers. With rhyming spells, magic Glitter Gifts, and pegaponies, Wings That Shine is sure to capture reader’s attention. Readers who enjoy animals and magic may also want to try The Baby Animal Rescue Fairies Series by Daisy Meadows or the Unicorn Princesses Series by Emily Bliss.