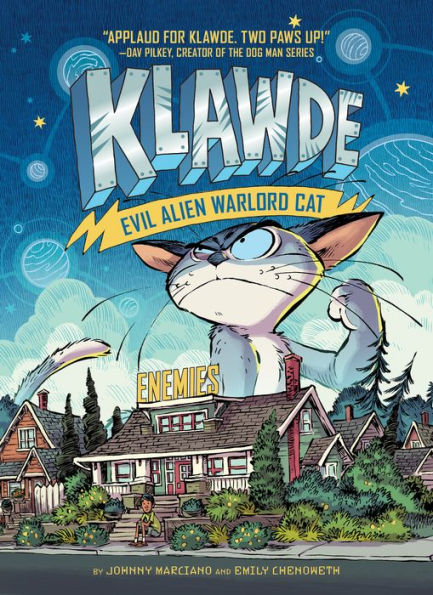 Klawde and Raj are back! As summer turns to fall, our favorite warlord cat remains in his pitiful, exiled existence. But Raj has an even scarier prospect than cosmic exile: starting at a new school. And if things didn’t seem complicated enough, both cat and human are confronted with two figures from their past they did not expect to pop up in Elba, Oregon.

While Klawde trains three kittens to become warriors, Raj is trying to make new friends and win a robotics contest. The tense story atmosphere chronicles Klawde and Raj as they both seek revenge on an enemy. When Klawde feels depressed and hides out in his bunker, Raj cheers him up with Klawde’s own words: “Revenge is a dish best served as often as possible! Revenge is the best medicine!” Klawde is truly an evil alien warlord who believes “an excellent lie is better than an inconvenient truth.” Even though Raj realizes that revenge isn’t the best medicine, the story has some bullying and gives no advice on how to conquer the problem.

Klawde: Evil Alien Warlord Cat #2 jumps back and forth between Klawde’s and Raj’s points of view. The story focuses on the drama of middle school, using humor and fun illustrations that are washed in blue. Klawde’s violent behavior is often outrageous and humorous, and he perfectly captures cats’ disdain for others. The conclusion shows Raj learning that revenge isn’t the right course of action because it hurts others.

Readers will enjoy the fast-paced story but may have difficulty with some of the advanced vocabulary, such as perfidious, malevolence, nefarious, and exponentially. However, readers will be able to use context clues to understand the meaning of the difficult words. Short chapters, large font, and pictures that are scattered throughout the story will keep even reluctant readers interested. Even though Klawde: Evil Alien Warlord Cat #2 doesn’t have an anti-bullying message, the highly entertaining story will keep readers flipping the pages until the very end.