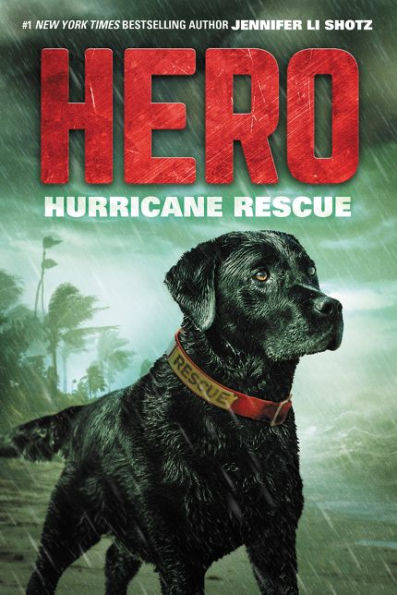 A dangerous hurricane is racing towards Ben’s hometown. Ben promises his father that he will stay safe inside their home. Ben doesn’t mean to disobey his father, but when Jack and his puppy, Scout, go missing, Ben knows he has to help. With the help of his friend Noah and retired search-and-rescue dog Hero, Ben sets off into the woods in search of his missing friend.

Ben, Noah, and Hero desperately try to locate Jack. When they find Jack, they soon realize that a raging flash flood has made it impossible to continue their trip. Together, Hero and Ben fight to keep everyone alive. But can Hero battle his way past alligators, mudslides, and raging floods?

With howling winds, angry alligators, and danger hiding in every corner, Hurricane Rescue is a fast-paced story that has surprises around every corner. Hurricane Rescue is told from Ben’s point of view, which allows the reader to understand his thought process and experience Ben’s worry about his missing friend Jack. Through their harrowing ordeal, Hero comes to the rescue time and time again. However, in the end, everyone must work together to make sure that everyone makes it out alive.

Hurricane Rescue is an engaging story that doesn’t only focus on the hurricane. Instead, the story also shows the importance of the father-son bond. While Ben lives in a traditional two-parent household, Jack’s parents are recently divorced, which makes it difficult for Jack to see his father on a regular basis. Jack’s grief over missing his father causes him to make the dangerous decision of sneaking off in order to try to make it to his father’s house, which is in a different town.

Told from Ben’s point of view, the readers understand why Ben isn’t truthful. Ben lies to Jack’s mother, intentionally disobeys his father, and leads his friend into danger. Even though the story ends happily, Ben should have been honest with the adults in his life instead of jumping into a dangerous situation on his own. Ben’s impulsive actions and dishonesty were also portrayed in the first book of the series.

Hero plays a main role in the story, and readers will enjoy seeing how Ben and Hero work together. The suspenseful story has likable, well-developed characters who show bravery and courage. However, some of the rescue scenes are unrealistic. Despite this, Hurricane Rescue will keep readers engaged until the last page while it illustrates the importance of rescue workers, such as the National Guard and police officers. Readers who enjoyed Hurricane Rescue should also try Survival Tails: Endurance in Antarctica by Katrina Charman.