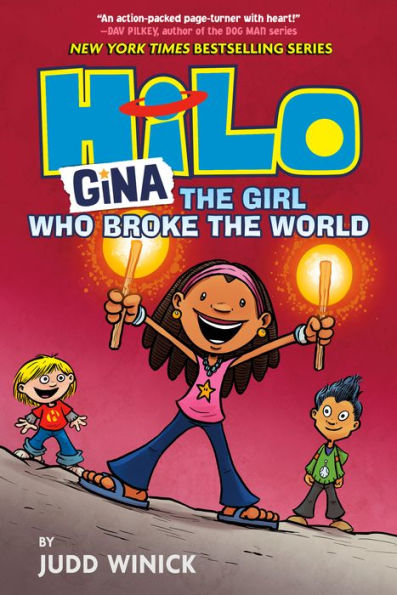 Hundreds of years ago, magic disappeared from Earth. At least…UNTIL NOW. Because suddenly, giant magical beings are appearing and only Gina can see them. Not to mention, Gina can somehow do magic herself. Magic is powerful. But it can also be dangerous. With D.J. and Hilo’s help, can Gina figure out how to protect the magical beings from the creatures who are after them? And can she learn how to use her magic to become who she was always meant to be?

Throughout most of the story, Gina does not want to use magic because she is afraid of the consequences. But when an alien shows up wanting to destroy the Nestors, Gina feels the need to protect the Nestors (even though she knows nothing about them). The story focuses on Gina’s attempt to keep the Nestors safe from other aliens. One of the aliens tells Gina, “You are meddling with forces far beyond your understanding. You will do more damage than good.” Despite this, Gina never questions the aliens to find why they want to destroy the Nestors. Instead, Gina fights the aliens, which allows the Nestors to change Earth’s timeline.

The relationship between Hilo, D.J., and Gina was one of the best aspects of the first six books of the series. Unfortunately, in Gina: The Girl Who Broke the World, Gina is left to fight the aliens alone. Instead of helping Gina, Hilo is trying to figure out his human body. Hilo’s struggle adds some bathroom humor. At one point, Hilo tells D.J., “Holy Mackerel! I just went to the bathroom! Pooping is outstanding.” However, this is not the only bathroom humor. Later, Gina meets another alien and she says, “Wow. . . smells like a possum’s butt.” While the juvenile humor may make younger readers smile, it adds nothing to the plotline.

The graphic novel’s panels are illustrated with bright colors that will capture readers’ attention. The graphic novel’s panels have 1 to 7 sentences which mostly use simple sentences with easy vocabulary. The many fight scenes give the story a fast pace and the many onomatopoeia words add interest because they appear in large, colorful text. Readers must first read the other books in the series or they will be confused, as Gina: The Girl Who Broke the World jumps right into the action and doesn’t explain the relationships between the characters

Gina: The Girl Who Broke the World is a confusing sequel that doesn’t have the same appeal as the first six books in the series. Instead of trying to help Gina fight the aliens, Hilo is more interested in food and his body functions. To make matters worse, the battle scenes are confusing not only because of the many aliens but also because the Nestors are shapeshifters. While Gina’s desire to help the Nestors is admirable, it’s unrealistic that no one tries to find out why the Nestors have come to earth.

While Gina: The Girl Who Broke the World is a disappointing sequel, the book may be worth reading because it sets up what could be an interesting conflict to be explored in the next book. If you’re looking for another humorous and fast-paced graphic novel, check out the Bird & Squirrel Series by James Burks.