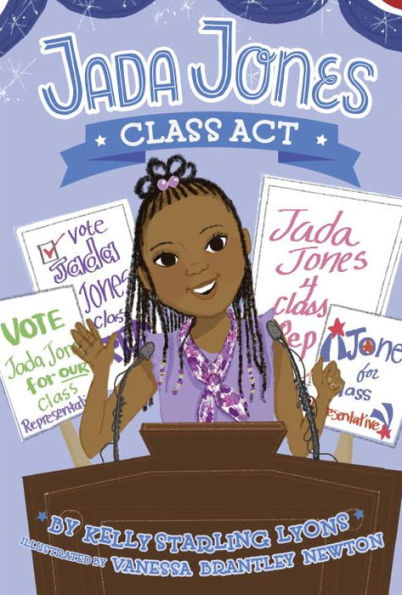 The nominations are in, and Jada is officially a student council candidate! At first, Jada isn’t worried about running against her friend Miles in the election. She’s sure that they can support each other even though they are both running for class representative. But it isn’t long before Jada’s classmates start taking sides. Could winning votes mean losing friends?

Still, Jada is excited to run for student council, and she has the perfect slogan: “Vote for Jada, the voice of a friend.” Soon Jada learns that running a campaign comes with a lot of conflicts. Jada’s class learns the characteristic of a leader, but soon the candidates are only focused on winning. As the class’s conflict heats up, Jada struggles to overcome her fear of public speaking and is distraught when a rumor about her becomes the talk of the class. To make things worse, Jada’s friends start pressuring her to make promises she can’t keep. As the campaign heats up, Jada Jones Class Act focuses on relatable conflicts including the dangers of rumors, the fear of public speaking, and the pressure to lie to keep friends.

Jada Jones Class Act has relatable characters, realistic conflicts, and reinforces real-life lessons. Throughout the story, Jada’s family plays a positive role, and Jada treats her brother with kindness. Even though Jada and the other candidate do not act like leaders, in the end, they learn from their mistakes and are able to repair their friendships. Jada Jones has many positive qualities—she’s kind, smart, creative, and honest. Readers will want to emulate Jada’s positive characteristics and parents may want to use the story as a stepping stone to discuss gossip, honestly, and friendship.

Jada’s struggle comes to life with black and white pictures that have a pop of purple. Jada Jones Class Act is intended for readers who are transitioning to chapter books. The story has eight short chapters, easy vocabulary, and illustrations on almost every page. The story does have several pages with only text and some complicated sentence structure. Overall, Jada Jones Class Act is an entertaining story that has positive life lessons. Readers who enjoyed Katie Woo by Fran Manushkin or Sofia Martinez by Jacqueline Jules will also enjoy Jada Jones.