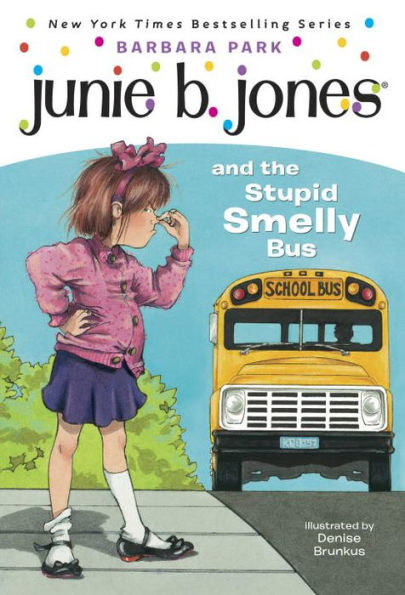 Junie B. Jones is excited to start school, but she is NOT excited to ride the bus. When she gets on the bus, she meets Jim, who she decides she hates. Once at school, she enjoys her day but struggles using her inside voice. But after hearing about a kid who rode the bus and had chocolate milk poured on their head, Junie B. decides to hide in the school rather than take the smelly bus home.

Once the other students leave, Junie B. enjoys exploring the teacher’s desk, the nurse’s room, and the empty school halls. Eventually, though, she has to use the bathroom. When she finds all the doors are locked, she calls 911 and announces she is having an emergency. When emergency responders show up, Junie B. is finally reunited with her mother.

Junie B. is a spoiled child with no respect for others’ boundaries. She shouts, she calls people dumb, she demands to get her own way, and she does not listen to her parents or teachers. Even after causing a commotion by hiding in the school, her main thought is, “my mother got to take me home. And guess what? I didn’t have to ride on the stupid smelly bus.”

While Junie B. Jones and the Stupid Smelly Bus will no doubt entertain readers, the bigger question is whether parents want their children reading a story with a terrible role model. Unless Junie B. Jones starts learning kindness, empath,y, and boundaries in the books to come, this series will be one that’s entertainment value fails to outweigh the life lessons that it imparts. If you’re looking for an entertaining series with a kinder main character check out the Jada Jones Series by Kelly Starling Lyons.