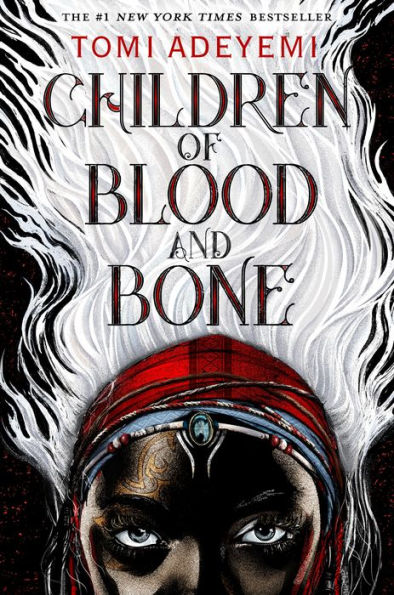 Children of Blood and Bone takes place in Orïsha, a rich fantasy landscape where magic users are born with white hair, signaling the powers they will inherit at thirteen. However, an evil king has wiped magic from the land in a genocide of all magic users and severed the people’s connection to the gods. The book alternates between the perspectives of the characters Zélie, Amari, and Inan.

Zélie is a seventeen-year-old girl from a small village, who has been called “maggot” most of her life because of her white hair. After her mother was killed in the slaughter of maji, survivors with white hair became second-class citizens. Bitter and stubborn, Zélie has been taking lessons to fight with a staff while trying to care for her ailing father.

Inan and Amari are the king’s children—the prince and princess of Orïsha. Amari sets off the story’s chain of events when she spies on her father, discovering a scroll that has the power to return magic to the land. Determined not to let it fall into her father’s hands, she runs away with it, and meets Zélie and her brother, Tzain. The three soon find themselves hunted by the king’s army, headed by Inan, who is haunted by an inner conflict over whether the king’s cause is just.

The majority of the narrative follows Zélie, Amari, and Tzain’s journey through Orïsha. While evading capture, they also embark on a quest to reunite the scroll with other ancient artifacts. Their goal is to perform a ritual that can restore the magical connection between the gods and the people of Orïsha.

Children of Blood and Bone includes unique worldbuilding and a magic system that proves central to the plot. Although the switches between narrators are almost dizzying, each character has a unique personality that comes alive on the page. Readers will find themselves sympathizing with the gentle Amari, the stubborn Zélie, and the conflicted Inan in equal measure.

The plot takes a few chapters to get off the ground, and the first act contains an unavoidable amount of worldbuilding. Still, it is packed with action, and the pacing will likely keep the attention of even easily bored readers. As the plot progresses, readers slowly get to see Orïshan’s magic firsthand. Each demonstration of magic will leave readers eager for more.

The story contains two central romances: Tzain and Amari, and Zélie and Inan. Both work rather well: their dynamics complement each other, and a decent amount of chemistry builds up between the two couples. In addition, readers will enjoy watching the friendship between Zélie and Amari develop from hatred into a deep mutual respect.

Fans of fantasy and magic will enjoy Children of Blood and Bone. Despite the fresh new look it gives to its magical land and teenage heroes, Children of Blood and Bone relies on the typical structure of a young adult fantasy. Seasoned readers of the genre will likely recognize the tropes of the “evil king,” the “chosen one,” and the “perilous quest.” These tropes are ubiquitous for a reason, though, and many readers won’t mind. The action, suspense, and intensity will make it irresistible.