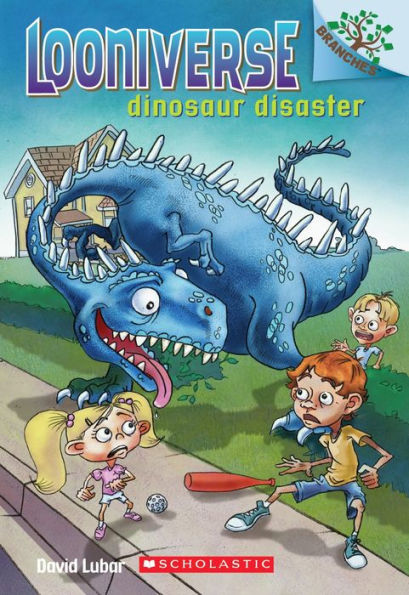 Ed and his friends are excited to see the robotic dinosaurs at Dinosaur Discovery. After going to see the dinosaurs, a real-life dinosaur follows Ed home. Ed’s sister, Libby, wants to keep the dinosaur as a pet. Ed needs to figure out how to use his powers for strangeness to send the dinosaur home. With the help of his friends, can they come up with a plan or will the dinosaur cause a disaster?

The same lovable characters from the first two Looniverse books appear in Dinosaur Disaster. A dinosaur that acts like a dog is the main conflict of the book. Readers will enjoy the playful dinosaur and Ed’s silly antics. The story doesn’t teach any dino facts or have as many of the fun play on words as the previous books.

Ed’s little sister, Libby, takes a starring role in the book. The brother-sister relationship is portrayed in a positive light, and Ed treats his sister with care. Ed’s mother briefly appears in the story and trying to keep the dinosaur in the backyard a secret helps create suspense.

Dinosaur Disaster will appeal to those who like dinosaurs and outrageous, silly events. The large black-and-white illustrations bring the story to life and show the range of emotions that the characters feel. The easy-to-read text and fun illustrations make the story a good choice for younger readers. Readers do not need to read the previous books to enjoy the third installment of the Looniverse Series.