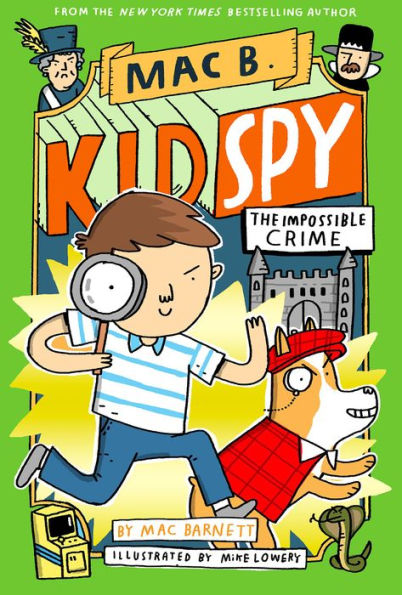 Mac is an ordinary kid who likes to play video games. While at the arcade, the Queen of England’s corgi appears with a note stating, “pick up the phone.” The Queen of England needs Mac’s help. Someone is planning on stealing the Crown Jewels. With the help of beefeater Holcroft, Max tries to keep the Crown Jewels safe. But when they disappear from a locked room, Mac must use all of his knowledge to discover not only who did it, but why.

The Impossible Crime uses humor, riddles, and corgis to teach readers about English history. The fast-paced plot has several of the same interesting characters as Mac Undercover, but isn’t as outrageously funny as Mac Undercover. However, readers will enjoy the silliness of the story, the dialogue between Mac and the Queen, and the surprise ending. As the story unfolds, readers will learn historical facts, geography, and different meanings of words. Each new fact is integrated into the story in a seamless manner, which makes learning fun.

Mac tells his own story with humor and uses lists and reputation to help readers follow the mystery. The Impossible Crime will entertain even the most reluctant readers for many reasons. Short sentences and simple vocabulary will help readers build confidence. Every page contains large black, green, and orange illustrations that add to the humor of the story. The illustrations and text work together to provide clues, create humor, and keep the reader interested to the very end. The Impossible Crime is a fun, easy-to-read book that is a great choice for any reader. It is also a perfect book for parents to read aloud to their children; the short dialogue is a great opportunity to use different voices for the characters.