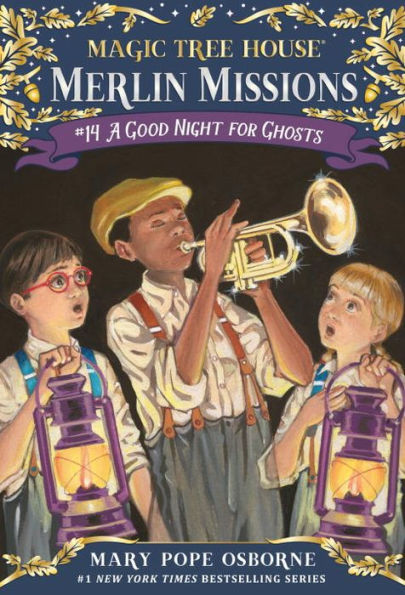 When Merlin the magician sends Jack and Annie to New Orleans, Louisiana in 1951, they are on a mission to inspire a young Louis Armstrong to bring jazz to the world. Unfortunately, Louis is too busy working to support his family to spend any time playing music. What’s more, Jack and Annie discover that New Orleans is not only the birthplace of jazz—it’s also haunted. It will take a host of ghosts and a daring plan from Jack and Annie to make this mission a success.

A Good Night for Ghosts uses the setting of New Orleans to show how “musical talent is really a great gift to share with the world.” Jack and Annie meet Louis Armstrong, who goes by the nickname Dippy. As they spend time with Dippy, they discover he is hardworking, cheerful, and never complains. In an interview, Armstrong said, “I didn’t wish for anything that I couldn’t get and I got pretty near everything I wanted because I worked for it.” Armstrong’s can-do attitude is portrayed throughout the book.

When the ghosts of Pirate Jean Lafitte and his crew appear, they have a jolly good time dancing to music and then disappear into the night. Instead of being scary, the pirates’ appearance allows Dippy to show how music can express one’s emotions. The happy ghosts are shown dancing and singing along with the jazz song that Dippy plays.

At the end of the story, Jack and Annie see how the streetcars were segregated. “African Americans were sitting in the back, while only white people were in the front.” When Jack notices the segregation he wonders, “Why would anyone not want to sit next to someone just because they are a different color?” However, the topic is not discussed in any more detail. The back of the book includes facts about New Orleans and Louis Armstrong, as well as a recipe for making spooky slat-dough ghosts.

A Good Night for Ghosts is best suited for proficient readers who are seven or older. Black and white illustrations that show Jack and Annie’s adventures appear every 3 to 7 pages. Throughout the story, readers will learn historical facts about Louis Armstrong and New Orleans. A Good Night for Ghosts blends historical details, magic, and a visit from ghost pirates into an entertaining story that will keep readers flipping the pages until the very end. Readers interested in more ghostly facts should also read Magic Tree House Fact Tracker #20: Ghost.