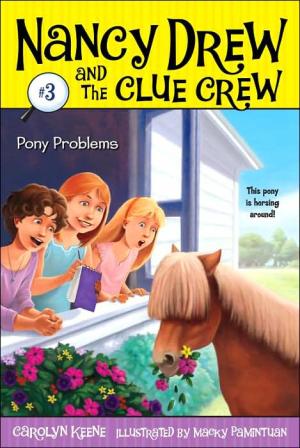 A new petting zoo has opened in River Heights. Nancy, George, and Bess can’t wait to check it out — especially since the zoo has the cutest Shetland pony named Buttons. And it looks like the Clue Crew won’t have to wait very long to get a glimpse of Buttons — he keeps escaping from his pen and showing up all over town!

Buttons is getting pretty famous for eating the flowers in everyone’s front lawns. As much as Nancy secretly wishes Buttons would turn up on her lawn, she knows it’s important to make sure he stays put. The only trouble is, no one knows how he’s getting out. Sounds like it’s time for the Clue Crew to saddle up and settle this pony problem.

During their investigation, the Clue Crew also meets Amanda, who lives on the farm. At first, when Nancy tries to talk to Amanda, Amanda completely ignores her. This doesn’t deter Nancy and her friends. Finally, Amanda is honest and tells the girls that she misses her old home. Luckily, Amanda’s father agrees to take Amanda to visit her old friends. In the end, the Clue Crew become Amanda’s new friends and Amanda’s conflict is solved in a hopeful manner.

The Nancy Drew and the Clue Crew Series has main characters that young readers can emulate. The girls are obedient, friendly, and nice. For instance, when Mr. Drew tells the girls not to pet Buttons, “the girls are careful to keep their distance as Mr. Drew asked.” In addition, the girls are given a five-block range that they can roam, and they stay within their parent’s set perimeter.

Pony Problems has many elements that will entertain readers, including black and white illustrations that appear every 2 to 5 pages. The pictures break up the text and help readers visualize the events in the plot. The last page of the book gives directions for making a craft pony as well.

Buttons’ behavior will make readers laugh and readers will enjoy solving the mystery. While readers will be drawn into the story because of the pony, parents will approve of the characters’ good behavior. Pony Problems is a wholesome story that will entertain both mystery fans and horse lovers.