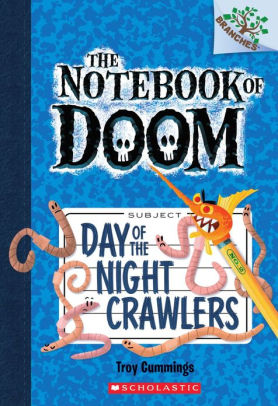 In a strange twist, Mr. Hoarsely, the secretary-gym teacher turns up missing and a strange woman in a fencing outfit takes his place. Alexander and Rip must now find out what happened to Mr. Hoarsely, in addition to finding a way to keep Stermont safe from megaworms.

The second installment of The Notebook of Doom is just as entertaining as the first. Besides silly monsters, Day of the Night Crawlers adds a new character, which causes some jealousy. Even though the monsters are dangerous, the story is never frightening. Younger readers will fall in love with the story’s characters and the illustrations.