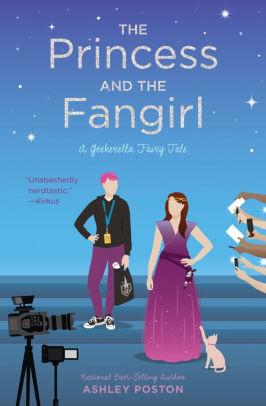 Everyone knows that Jessica Stone hates everything to do with the beloved sci-fi franchise Starfield. When she signed on to play the beloved Princess Amara, Jess was expecting to use the role as a springboard into bigger and better films. But being an actress in a sci-fi universe comes with an overwhelming amount of criticism. Jess can barely handle the hatred she gets from fans on the internet, and she certainly isn’t looking forward to being surrounded by them at the annual ExcelsiCon.

Starfield fangirl, Imogen Lovelace, practically grew up on the convention floor. Every year her family runs a booth at ExcelsiCon, but this year Imogen has her own mission. She wants to #SaveAmara from being killed off, and she’s got thousands of signatures on an online petition to prove she’s not the only one. When an unfortunate case of mistaken identity leaves Imogen onstage at a panel in Jessica’s place, Imogen takes the opportunity to speak out in favor of saving the Princess.

Jessica is furious, telling Imogen she will ruin her if she even attempts such a thing again. But when an incredibly confidential script to the Starfield sequel leaks online, and Jessica’s script is nowhere to be found, she’s afraid the blame will fall to her. Jess needs to expose the real culprit before the end of the Con or risk losing her career. The solution? Trade places with Imogen so she can scope out the Con herself, a plan that turns out to be much easier said than done.

The Princess and the Fangirl is a modern-day Prince and the Pauper with a fandom twist. Both Jessica and Imogen think they can gain something by stepping into each other’s shoes, but they both end up with an unexpected perspective. Jess is longing for anonymity and an escape from the harsh gaze of the Starfield fandom. She finds herself dropped right into the middle of it all, getting a first-hand look at how the stories she always viewed as inconsequential can bring people together. Meanwhile, Imogen, who is searching for a sense of purpose, is eager to use her newfound influence to right a few wrongs. But her peek behind the scenes reveals a disturbing darker side of Starfield that only Jessica Stone gets to see.

This story is technically a sequel to Geekerella, bringing readers back to ExcelsiCon one year later. There are a few cameos from familiar faces, but Geekerella can still stand on its own. Fans of romance will enjoy the fact that each of the girls has an adorable love interest, while the mystery of the leaked script will keep readers on their toes. Both Jessica and Imogen struggle with self-image issues that teen readers will find very relatable. And, like in Geekerella, Poston’s commentary on fandom is clever and meaningful: behind every Princess, there is a normal girl.