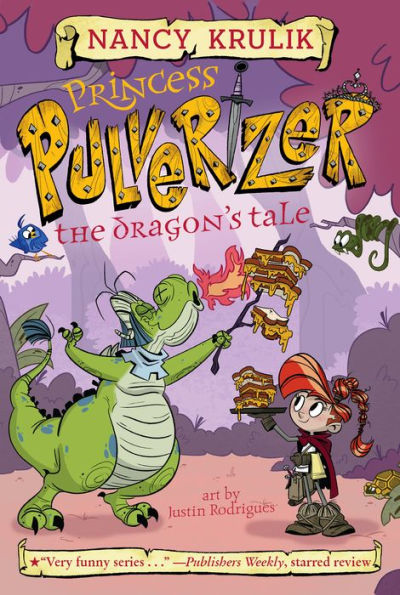 Princess Pulverizer plans to become a knight. But first, she has to complete her Quest of Kindness and complete eight good deeds. Princess Pulverizer is determined to make her dream come true. Her dragon friend Dribble dreams of being a chef. He wants to run his own restaurant, but when people see him, they run away.

The villagers start feeling sick to their stomachs and so does Dribble. Due to a bad bellyache, Dribble accidentally sets a barn on fire. Everyone in town is angry at Dribble. How can Princess Pulverizer prove that Dribble isn’t a typical fire-breathing dragon that loves to burn buildings down? Is there any way the two will make their dreams come true?

Princess Pulverizer isn’t a typical princess. She doesn’t dream about dresses, but instead wants to be a knight. The tough princess is selfish, spoiled, and snobby. With the help of her friends, she is trying to be more kind. However, she still has a hard time not focusing on herself. Although Princess Pulverizer will never be a perfect princess, she has determination and spunk.

The princess and her friends discover that a polluted river is the reason people are getting sick. The story missed an opportunity to teach readers about the harmful nature of trash. At one point both Dribble and Lucas drink from the polluted river. In the end, the river is not cleaned up by hard work but by magic.

The Dragon’s Tale is perfect for readers who are ready for chapter books. The story contains easy vocabulary and short paragraphs. Black-and-white illustrations appear frequently and add humor to the story. The illustrations show Princess Pulverizer’s facial expression and her vast emotions in a humorous way.

Even though The Dragon’s Tale doesn’t have the same learning value as the previous book in the series, it will appeal to many readers. The high-interest story doesn’t only includes a princess, a friendly dragon, and a unicorn. Dribble’s desire to open a restaurant gives the story a unique twist. In the end, Princess Pulverizer helps Dribble make his dream a reality—at least for a day. Fairy tale fans will enjoy watching Princess Pulverizer and her friends travel through the kingdom and working together to overcoming their obstacles.