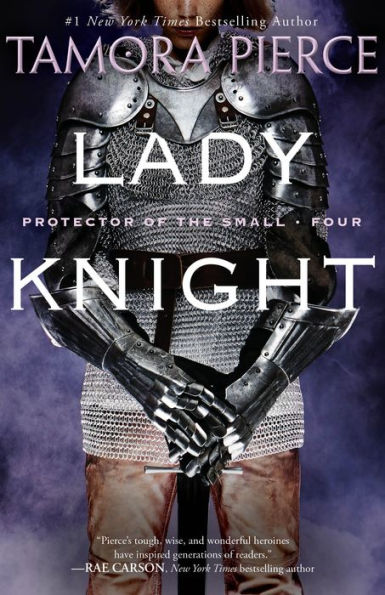 The Chamber of the Ordeal has given Kel a task that could win the war and save countless lives. Kill the Nothing Man, who entraps the souls of children to fuel metal killing machines. But the Chamber is unable to give her any details, leaving her wondering how she can find the Nothing Man. Is there a way to fulfill her mission without breaking her oaths and abandoning her duty? Or will Kel have to sacrifice everything—including her life?

Unfortunately, Kel quickly finds herself trapped in Tortall when Lord Wyldon assigns her to run a refugee camp. Refugees are pouring in due to the war, and Kel worries they may be a target as the Nothing Man needs children to use for his machines. Kel cannot abandon the refugees, so she sets aside the Ordeal’s mission and works to make New Haven the best fort it can be. With constant attacks by Scanran forces, things are never quiet for long. And soon, an unimaginable tragedy will set Kel on a course that will end up with her going head to head against the Nothing Man, his magic, and his army.

Many readers will relate to Kel because she faces her troubles with determination, understanding that her actions have consequences. Kel’s journey was not easy. Throughout her journey, she shows physical and mental strength, but also the strength of conviction. Kel understands the importance of duty and is willing to go to any length to protect others.

Knight is a roller coaster from beginning to end. The story has a slightly darker tone than the previous books because it focuses on war and describes war’s causalities. Kel has become the knight she always wanted to be. She is kind, and brave, and noble—a great example for girls and boys everywhere. The plot will keep readers engaged, as will the wide cast of new characters. From Scanrans to refugees, Tamora Pierce once again has managed to create a wide cast of diverse characters that are as well-developed as they are lovable. The only disappointing thing about Knight is that it is the last book in Kel’s wonderful story.