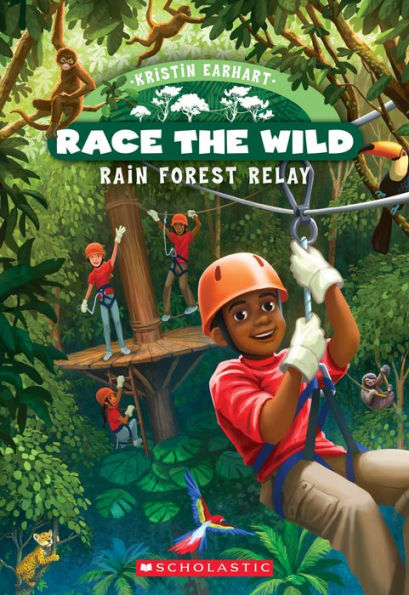 Russell was the one that convinced his friends to try out for the race around the world. That’s why he’s so surprised that all four of his friends are in the same group, but he’s in a group with strangers. Running the race will be extra difficult for a team that knows nothing about each other. Despite this, Russell and his team are eager to begin the first leg of the course.

As they race through the lush Amazon rain forest, Russell and his team see amazing animals, raging rapids, and toxic venom. But the animals aren’t the only danger in the race. In order to win, Russell’s friends aren’t afraid to be sneaky and cheat. Russell isn’t sure what he should do. He knows what his friends are doing is wrong, but he doesn’t want them kicked out of the race. Can the red team learn to work as a team? Is there any way Russell and the red team can finish the race ahead of the sneaky green team?

Rain Forest Relay is a fast-paced story that takes the readers on a race through the Amazon. Although the story has plenty of adventure, it also hits on the topic of cheating in order to win. Throughout their journey, they continue to struggle with the green team’s ability to show up unexpectedly. Russell explores his conflict with his friends’ behavior and his desire to keep his friends’ activity a secret. By the end of the book, Russell has not answered these questions, but he knows that his team can win if they use teamwork.

With nine short chapters, each chapter packs a lot of adventure into it. While the race is interesting, a lot of animal information is thrown at the reader. Occasionally, the story seems more like a textbook than an adventure story. The four main characters are featured on the cover and are diverse—one is African American, one is Indian, one is Hispanic, and one is Caucasian. However, the characters’ races are never discussed and the characters are generic. While the characters are likable and competent, they are not alone on their journey. Instead, each group has an adult that keeps an eye on the contestants and makes sure they are safe.

Black and white illustrations appear every 3-6 pages, and the beginning of each chapter has interesting facts about the rainforest and the animals who make the Amazon their home. Fluent readers will enjoy trying to solve the race’s clues and learning about the Amazon. Rain Forest Relay is an engaging story that will entertain any reader who loves animals and adventure.