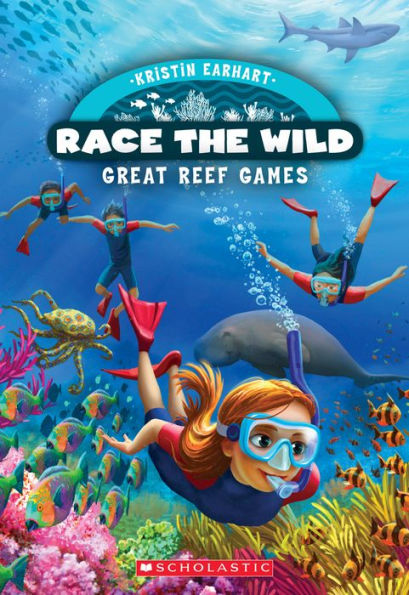 Round two of the race takes the teams to the Great Barrier Reef. In order to answer the clues, the teams must become underwater explorers. Sage is determined for her team to stay in first place. The team will meet dangerous sea creatures—scorpion fish, a blue-ringed octopus, and other sea dangers. As Sage bosses her team around, she becomes pushy and argumentative.

The second installment of the Race to the Wild Series focuses on Sage. The story continues to hint that Sage has a secret that motivates her to win and to be protective of Mari. Throughout the adventure, Mari is ill, which reminds Sage of her sister’s accident. When Mari helps Sage, Sage gets defensive and says, “You don’t look out for me. That’s not your job. I can take care of myself.” The conclusion never explains why Mari was sluggist, and Sage’s big secret is anticlimactic. However, Sage does realize that it isn’t her job to always look after everyone. Instead, each team member has their own special talent and all of them need to have each other’s backs.

The Great Reef Games is crammed full of facts about the Great Barrier Reef and the animals that live there. In one scene, Mari finds a sea turtle that is wrapped in a net. Mari and her team stay with the turtle until someone from the animal rescue center comes to help. While most of the story focuses on the kids and the race, they still rely on adults when they need additional help.

In Rain Forest Relay, Russell discovers that his friends are cheating, but he doesn’t turn them in. The second book of the series doesn’t address this issue. Even though Race the Wild is a competition, the red team has no interaction with other teams. Despite this, readers will enjoy the fast-paced story that highlights the importance of teamwork. One positive aspect of the story is that several of the characters are “unusually intelligent,” which is a huge advantage for the team. However, as the red team learns more about each other, the boys team up and are often snarky.

Great Reef Games is very similar to the television show The Amazing Race. Because the characters are in a competition, the characters spend very little time in the same place. While the race is interesting, a lot of animal information is thrown at the reader. Occasionally, the story seems more like a textbook than an adventure story. Great Reef Games incorporates Sage’s secret into the story, but this part of the story seems forced. Despite this, readers will enjoy trying to solve the race’s clues as well as learning about sea life. With nine short chapters, black and white illustrations every 3-6 pages, and interesting facts about the Great Barrier Reef, proficient readers will enjoy the underwater adventure. Older readers who love sea life should add Dragged from Under: The Bull Shark by Joseph Monninger to their must-read list.