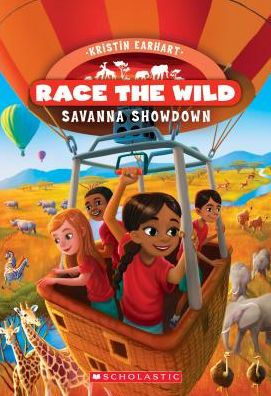 When the teams take on the African savanna, the competition heats up, and Mari starts to feel the pressure. She has never been the strongest or fastest racer. Sure, she knows almost everything about lions and rhinos and zebras. But facts can only get the team so far. She better keep up, or she might let her friends down because the finish line is in sight, and Team Red wants to win!

The fourth installment of the Race the Wild series brings back the conflict of Russel’s friends cheating. Even though all the members of the red team know the green team is cheating, none of the kids tell an adult. In the end, the green team loses the race, but there are no consequences for the team’s cheating ways.

Savanna Showdown uses the same format as the other books and includes information on the Savanna and the animals that live there. Even though the race is a competition, the other teams are rarely mentioned. The red team is able to win the race, but the events that led up to their win are anticlimactic and lack suspense. However, the story does highlight the importance of working as a team.

The Race the Wild Series would interest younger readers who are love in animals. However, many of the animal facts sound like a textbook. While the plot will be easy for proficient readers to understand, some readers may struggle with the advanced vocabulary. The repetitive plot, lack of suspense, and underdeveloped plot will leave readers disappointed. If you are looking for an exciting adventure that focuses on animals, readers should try the Rainbow Magic Series by Daisy Meadows, The Critter Club Series by Callie Barkley, or The Bad Guys Series by Aaron Blabe.