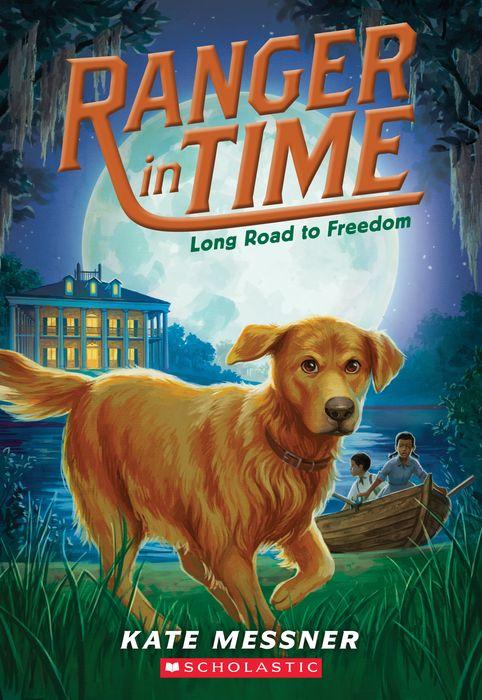 Ranger is a time-traveling golden retriever with search-and-rescue training. In this adventure, he goes to a Maryland plantation during the days of American slavery, where he meets a young girl named Sarah. When Sarah learns that the owner has plans to sell her little brother, Jesse, to a plantation in the Deep South, it means they could be separated forever. Sarah takes their future into her own hands and decides there’s only one way to escape – to run north.

Told in third-person, Long Road to Freedom includes the inner thoughts of both Ranger and Sarah. Sarah’s thoughts add suspense by focusing on her fear of being caught and sent back to her master’s plantation. Ranger perceives other characters’ emotions through smell, which conveys people’s feelings to the reader in a non-scary way. For example, when Jesse runs into the forest alone, Ranger goes to look for him. “Jesse’s scent was still there, with a mix of new smells that make the hair on Ranger’s neck stand up. Deer. Blood. And wolves.” Unfortunately, Jesse is snotty and stubborn. His behavior almost attracts the attention of slave hunters. Jesse’s attitude is annoying, and readers may wonder why he isn’t willing to save himself.

Long Road to Freedom explores the Underground Railroad in kid-friendly terms. As they run north, Sarah and Jesse find safe passage with people who are willing to hide them. When a group of men tries to bully their way into a barn where the two children are hiding, Ranger alerts the neighbors. When the bad men are surrounded, they back down. Ranger thinks, “They didn’t have tails to lower, but Ranger understood that they were submitting. The challenge was over.”

The Ranger in Time Series format will appeal to young readers. The book has large text and full-page, black-and-white illustrations that appear approximately every six pages. The author’s note includes information about the historical people and places in the book, as well as a list of resources for readers who want to learn more about the Underground Railroad.

Even though readers will learn many facts about the time period, the facts are integrated into the plot, so the book never feels like a history lesson. Readers will fall in love with Ranger, who loves squirrels, his family, and helping people in need. Long Road to Freedom uses a lovable dog and a unique premise to teach readers about history.