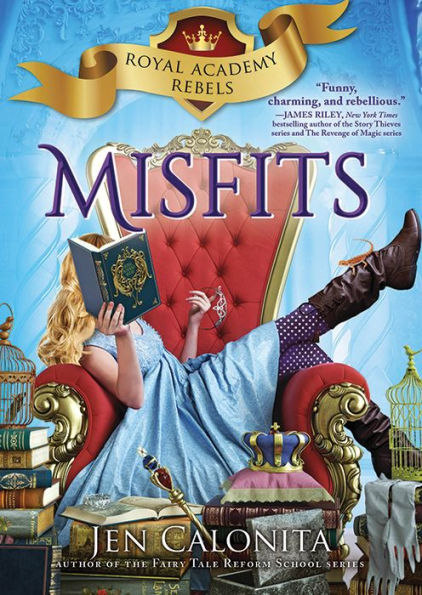 Devin can speak to animals, which helps her be a caring creature caretaker. She would rather be out in the woods healing animals than inside learning to be a princess. But she’s twelfth in line for the throne of Enchantasia, so there is no way she can avoid going to the Royal Academy.

Devin didn’t read the required material because she was too busy helping animals, but as soon as she arrives, she realizes that she is horribly out of place. While Devin is excited to meet Olivina, the beloved fairy godmother to Cinderella, Snow White, and Rapunzel, she is also enrolled in classes that don’t suit her interests, such as “How to write a love note,” and “From cha-chas to charming princess.”

When danger appears, Devin discovers that Olivina is obsessed with teaching the princesses to wait for the princes to save them. The students aren’t learning to rule a kingdom, but learning to be helpless. Devin knows that something is amiss. When the fairy godmother threatens to banish Devin, Devin must decide if she will act like a proper princess or if she will search for the secrets that Olivina is hiding.

Besides being an entertaining story, Misfits shows that not everyone can fit into a mold. Devin isn’t the only character that is unique. There’s a prince that is more interested in chopping vegetables than chopping off dragon’s heads. Another royal is more interested in telling the truth in her tabloids than talking about the latest fashion. These unique characters’ bravery shines as they fight to keep their classmates safe from fairy-tale monsters.

Throughout the story, Devin is frustrated by the princess rules. Snow White tells Devin, “What Olivina wants for all of us, more than anything, is to feel safe and secure in our roles.” The fairy godmother, Olivina, is upset when Devin saves herself and others from danger. Olivina says, “But that wasn’t your role to play, was it? You were supposed to let the princes do that. If they can’t rescue you, what are they good for?” Throughout the story, readers will learn that sometimes people need to break out of the roles society has given them.

Another theme is the importance of being honest. Professor Pierce teaches that it is important to, “be honest. Honesty is important in a royal—in all humans. . .” He also tells Devin, “Being royal means acting responsibly with the power that you’re given. It’s about making tough decisions for the good of your subjects.”

Full of fantastic fairy tale fun, Misfits follows Devin who is a lovable, unpredictable character. Devin isn’t interested in ball gowns or shoes, and she definitely isn’t interested in reading the required academy reading, which leads her into trouble right from the start. Devin’s caring, questioning behavior makes the reader root for the spunky girl. The cliff-hanger ending will leave readers eager to read the second book of the series, Outlaws.