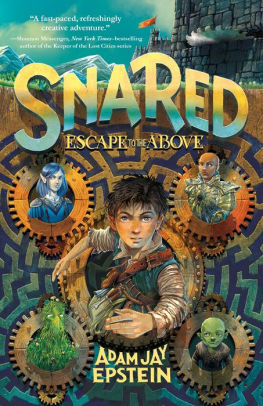 Wily has spent the twelve years of his life underground learning how to be a trapsmith. Wily makes traps to keep invaders from the cavern mage’s treasure. Even though Wily wonders what life in the Above would be like, he knows he can never leave.

Then a group of treasure hunters appears—an elf, a moss giant, a warrior with a magic arm. They want the caver mage’s treasure, including Wily himself. With the help of Wily, the group can invade every other dungeon and flee the Infernal King’s realm. Wily is about to go on an adventure, which will lead to a battle against the Infernal King, who uses gearfolk to terrorize and imprison the innocent. But is there any way this diverse group can work together and escape the Infernal King’s gearfolk?

A fun fantasy, Snared: Escape to the Above starts strong from the start. Wily’s underground world comes alive. When Wily leaves the cave he has lived in, seeing Wily’s perception of everyday things, such as a butterfly, is interesting and brings humor. Although Wily and his group must flee from horrors, the violence is not graphically described. Through Wily’s experience, he learns that “a prison doesn’t need cages to make you feel trapped. If you take away a person’s choices, they could be in the most beautiful place in the world and still be caged.”

Advanced elementary and junior high readers will enjoy the quirky characters and the interesting traps that Wily encounters. Although the plot is a bit predictable and the Infernal King is defeated too easily, readers will enjoy the adventure along the way. Full of humor and lessons about friendship and doing what is right, Snared: Escape to the Above will please adventure-seeking readers.