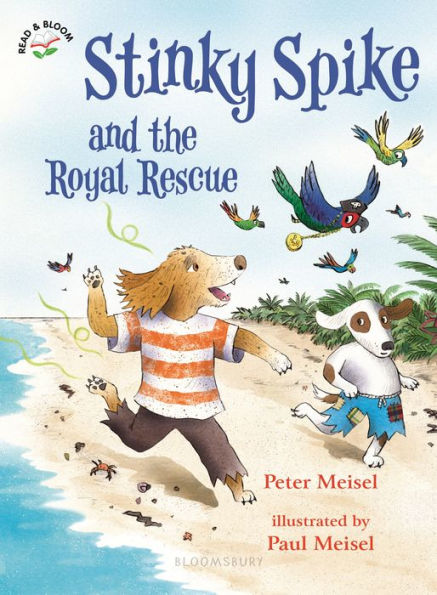 Can Stinky Spike sniff out a missing royal pup?

Stinky Spike and Captain Fishbeard are thick as thieves and ready for adventure! That is, until they’re captured! When Princess Petunia offers Spike a chance to find her lost puppy and free Driftwood’s crew, Spike is the top dog for the job. How hard could it be to find one fluffy royal pooch?

Stinky Spike takes center stage in a silly tale that has Stinky Spike and a princess looking for a lost puppy. While Stinky Spike’s love of putrid smells is a unique premise, the dog’s bad body order becomes less humorous as the story progresses. Stinky Spike is clearly the hero of the story, but he doesn’t use investigative skills and there are no clues for mystery-loving fans to follow. Another disappointing aspect of the story is that the pirates do not play a large role in the story’s plot. Despite this, younger readers will still enjoy Stinky Spike’s adventure.

Stinky Spike and the Royal Rescue has fun, brightly-colored illustrations that will tickle readers’ silly bones. Even though the story focuses on animals, the humans that Spike meets a diverse group of pirates. Plus, Princess Petunia has dark hair and brown skin. Stinky Spike and the Royal Rescue is told in three chapters and each two-page spread has 4 to 7 sentences. While early elementary readers will enjoy the story, they may need help with the story’s vocabulary.

Stinky Spike is a unique main character who has very few heroic qualities but still saves the day. The high-interest topic—dogs and pirates—will cause readers to pick up the book while the silly plot, large illustrations, and many animal characters will keep readers interested until the very end. Readers who want to learn more pirate facts should set sail to the library and check out Pirate Pedro by Fran Manushkin.