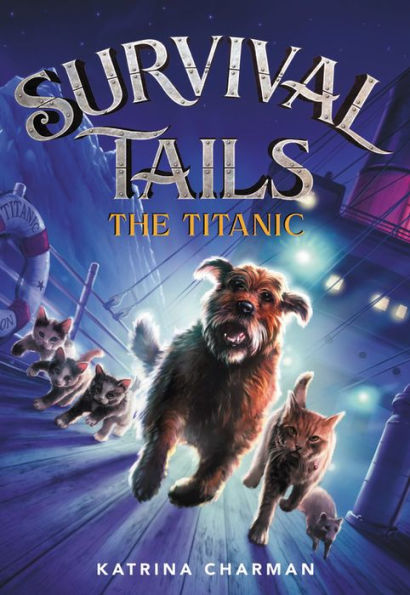 Mutt loves his human girl, Alice. When he discovers that his owner and best friend, Alice, plans to sail to the new world on the Titanic without him, he’s determined to find a way on the ship. Mutt is terrified of the water, but he won’t let an ocean separate him from Alice. A friendly rat, King Leon, helps Mutt sneak aboard the ship. But it isn’t long before the captain’s cat, Clara, discovers the stowaways. Reluctantly, Clara agrees to help Mutt find Alice. But first, Mutt must agree to look after three abandoned kittens that Clara found in a lifeboat.

A mangy dog, a friendly rat, and a pamper cat work together to stay hidden from the humans and keep the kittens alive. But when the unthinkable happens and the so-called unsinkable ship hits an iceberg, Mutt and his new friends have to race against the clock to find their humans—and to survive.

Survival Tails: The Titanic takes the reader on a trip back in time when everyone thought the Titanic was unsinkable. Told from Mutt’s point of view, the story takes a unique look at the ship through the eyes of animals. For the stowaway animals, life on the Titanic is dangerous. Not only do they have to scrounge for food, but they also have to avoid the humans who most likely would throw overboard. As the story unfolds, readers will fall in love with each animal, whose unique personality comes to life. Even though the animals could have easily become enemies, they unite to form an unlikely friendship that puts the kittens’ needs above their own.

Suspense builds from the very first page and ends with the heart-wrenching sinking of the Titanic. The story contains pockets of humor and has three black and white pictures that help bring the scenes into sharper focus. The animal’s loyalty to each other and their humans is heartwarming. However, Survival Tails: The Titanic doesn’t shy away from showing the discrimination between the first-class passengers and the third-class passengers. In the end, it didn’t matter what class a person was. When the Titanic was sinking, the passengers realized, “in the end, few things truly mattered.”

Survival Tails: The Titanic uses a unique point of view to create a suspenseful, beautiful story of friendship and love. Even though the story focuses on the animals, it stays loyal to the historical facts of the Titanic. Although the sinking of the ship is described in a kid-friendly manner and the death of people is never described, the ending is heart-wrenching and will have readers crying as several of the characters they loved are doomed to death.