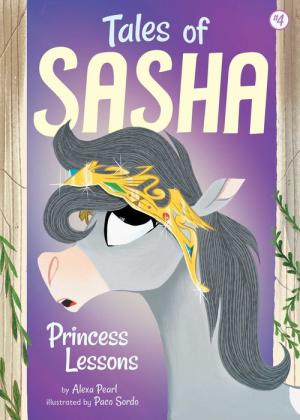 Verdant Valley is a magical place where horses live. However, danger is at Verdant Valley’s door. In order to help, Sasha studies to pass her Princess Test. However, the skills that Sasha learns aren’t skills of character. In order to pass the Princess Test, Sasha “pranced and flew. She ate and drank in a princess-y way. She won the staring contest. Flowers stayed in her mane when she ran. She remembered the ancient battles and the song of the giant snail.” While young readers will enjoy the tale, the story portrays Sasha as a typical princess who needs to be “fancy.”

Princess Lessons shows the importance of not keeping a secret if the secret puts someone else in danger. When Sasha prepares to leave Crystal Cover, Sasha asks her friend, Kimai, to keep a secret. However, Kimai tells the secret to the safety patrol. At first, Sasha is upset that Kimai didn’t keep the secret. Kimai says, “I am your friend. I broke my promise only because it’s not safe for you to leave.” Later Sasha forgives Kimai and realizes her friend did the right thing.

Young readers will relate to Sasha as she tries, and fails, to learn new skills. While Sasha does not always do what’s right, she clearly cares about others. The conclusion ends abruptly, without solving the problem of the plant pixies, so readers will be eager to see what happens in the next book, The Plant Pixies. If you’re looking for a book series that young readers will love, the Tales of Sasha series will keep readers engaged with 12+ books to choose from.