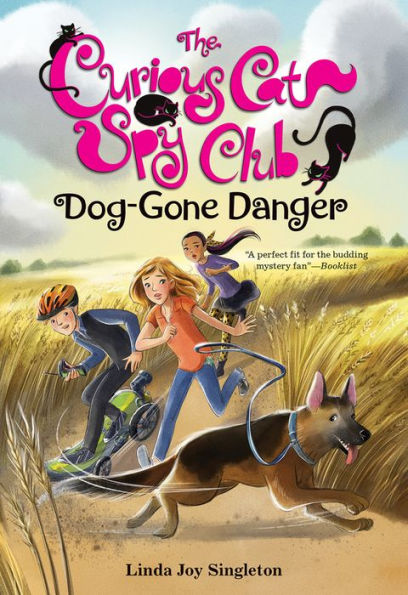 Kelsey and her friends, Becca and Leo, discover a purebred pug puppy in a run-down barn. Did he run away from home, or did someone intentionally abandon him? It’s another case for the Curious Cat Spy Club.

But before they can figure out the pug’s origins, a bigger mystery appears. Kelsey’s mom has disappeared! Kelsey is worried that it has something to do with her mom’s job as an animal control officer. Her dad and siblings think her mom is just taking a break from the family—after all, she has done this before. But Kelsey’s not convinced that her parents’ marital problems are the cause of her mom’s disappearance. With her two friends by her side, Kelsey vows to discover the truth.

Kelsey and her two friends, Leo and Becca, are all likable characters who want to protect animals. The three friends all have different talents, which add interest to the story. For instance, Leo loves to build gadgets, such as a smell-sniffing robot, while Becca is outgoing and can talk to anyone. Major, a retired search and rescue dog, also joins the Curious Cat Spy Club during their mission. Readers will enjoy looking at the clues to solve the mystery as well as the interplay between the characters.

In addition to the mother mystery, Dog-Gone Danger has some parental drama. Kelsey learns that her parents almost got a divorce. Meanwhile, Becca is frustrated because her mom is dating the sheriff. However, Becca uses this relationship to her advantage by using his personal phone number to call him.

One negative aspect of the story is when Kelsey and her friends sneak into several different buildings, trying to investigate her mom’s disappearance. They meet several potential suspects and learn new clues; however, the story downplays the danger of their actions.

Readers will enjoy the mystery, the dog action, and the friendship between the Curious Cat Spy Club. Dog-Gone Danger will appeal to both mystery fans and animal lovers. The best part of the book is the three friends, who help and support each other. In addition, the plot is easy to follow but has enough complexity to appeal to middle school readers.