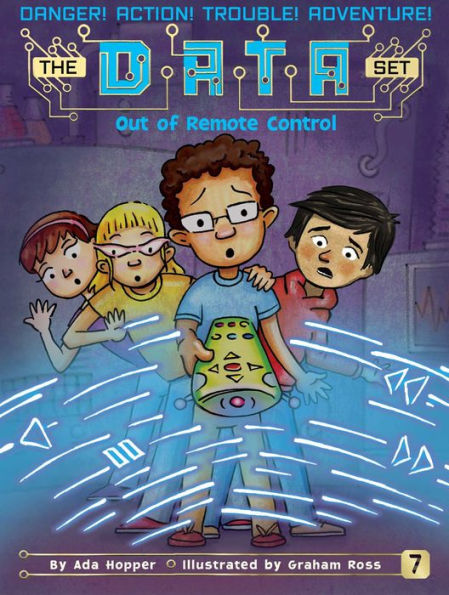 The Data Set finds a time-altering remote control. In the hopes of discovering if their project for the science fair works, they hit the button and travel into the future. But from there everything goes wrong. When Laura drops the remote control, the kids are taken on a crazy adventure. Is there any way they can reset the remote control? Will they be stuck in an alternative universe forever?

Out of Remote Control takes the reader on a wildly fun adventure. As the kids jump into television shows, younger readers will enjoy the funny pictures of Dr. Bunsen as he plays the role of villain in every show. Each short chapter jumps to a new place. In an attempt to outrun danger, the kids keep hitting the buttons on the remote control, and they jump into new situations.

The kids work together to try to figure out how to return home. The funny black-and-white illustrations appear on every page and help beginning readers follow the plot. The illustrations add humor, but also help break up the text so new readers do not become overwhelmed with the number of words on the page. As the seventh installment of the series, Out of Remote Control doesn’t continue the plot from previous books and can be read as a singleton.