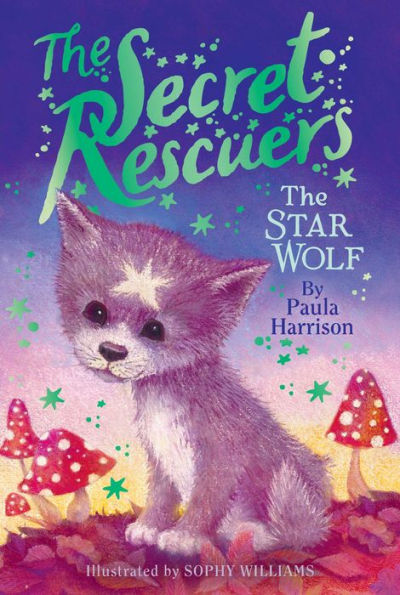 Emma lives in a forest full of magical creatures, including star wolves! The wolves’ special song makes the stars appear in the sky every night. When Emma rescues a baby star wolf from a trap, she knows she must return the pup to his family. Will she be brave enough to go on a nighttime adventure and help keep the stars shining?

The Star Wolf brings back Lord Hector, who is determined to silence the star wolves’ song. This time, Lord Hector’s servants make failed attempts to catch Teo, the baby star wolf. The servants add non-scary suspense to the story.

Unlike previous books, Sophy plays a large role in the story. Sophy and Emma work together to defeat Lord Hector’s schemes. Both girls are sweet, helpful, and kind to others. Despite being frightened, the girls help Teo find his wolf family. The girls also put others’ needs before their own. For example, when the star wolves invite the girls to listen to their magical song, Emma says, “Lord Hector’s still out there. And his servants still have that little bottle of potion. We’d love to stay and listen to the Sky Song, but there’s one more thing we have to do.”

A diamond owl named Kellan adds another wonderful element to the story. This skeptical, magical owl helps Sophy and Emma. Despite being reluctant to help the girls, he discovers that “silly humans” can be brave. Keelan also adds some humor when he scares Lord Hector’s servants.

The Star Wolf will entertain readers with a fast-paced plot and non-scary suspense. The adorable animals and sweet characters will appeal to both readers and parents. Both girls are polite, helpful, and brave. When Emma makes desserts for her family’s booth, she doesn’t complain. Instead, she happily helps and cleans up the kitchen when she is finished.

The first book in the series, The Sky Unicorn, introduces Sophy and the magical stones. Even though Sophy makes an appearance in all of the books, readers do not need to read the stories in order. Each book focuses on a new main character, which adds interest to the series. The story uses easy vocabulary, simple sentence structure, and black and white illustrations to make The Star Wolf accessible to readers. Illustrations appear every 2-4 pages and help readers understand the plot.

The Star Wolf is an engaging story that shows the importance of kindness and bravery. Readers who enjoy magical animals should check out The Enchanted Pony Academy series by Lisa Ann Scott.