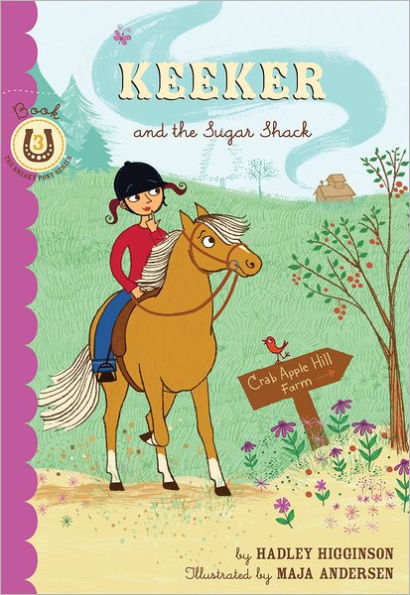 It’s mud season in Vermont and everyone has cabin fever. Keeker is so bored she has started wearing pantyhose on her head. (She loves to pretend she has long braids like Laura Ingalls Wilder.) So when an intriguing new neighbor starts mixing up a concoction in the shack on her farm, Keeker and Plum set out to investigate. When the two detectives befriend their eccentric neighbor, they find that first impressions aren’t always right and even the yucky old mud season can be magical.

Young readers will relate to Keeker, who gets bored being inside and lets her imagination run wild. When Keeker thinks her new neighbor is a witch, she and her sneaky pony, Plum, go on a mission to spy on the old woman. Both Keeker and Plum know that sneaking around is wrong, but Plum wants to check out the new neighbor’s house because “it did sound a bit sneaky. And Plum loved to be sneaky.” The idea that it is okay to sneak around is reinforced several times, including when Keeker went to bed with “her hands still syrup-sticky. (As usual, she had only pretended to wash her hands before dinner.)”

Keeker and the Sugar Shack is told in five short chapters and has a simple plot. Large black and white illustrations appear on almost every page. The illustrations will help younger readers visualize the characters and events in the story. Plus, readers will giggle when Keeker disguises Plum as a tree when she “picked some branches and tucked them into Plum’s bridle.” Beginning readers will need help with some of the more advanced vocabulary such as hunkering, kooky, and cauldron.

While Keeker and the Sugar Shack will appeal to horse-loving readers, parents may not appreciate Keeker and Plum sneaking around. Despite this, Keeker’s story would make a fun read-aloud book because of the dialogue and onomatopoeia words. In the end, Keeker learns she shouldn’t judge a person by their appearances (or by her imagination). The fun plot will keep young readers entertained and readers will be eager to read the next book in the series, Keeker and the Springtime Surprise. Horse-loving readers will also love the Big Apple Barn Series by Kristin Earhart.