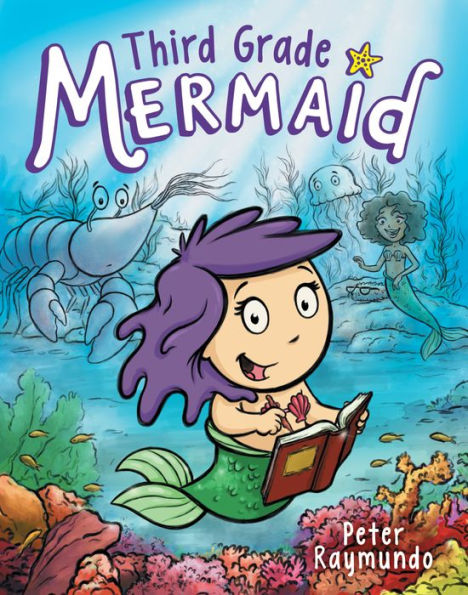 Cora dreams of being like the Singing Sirens, the beautiful mermaids that are on the best swim team. But when she fails spelling, she is taken off of the team unless she can earn an A on the next spelling test. To make everything worse, if Cora can’t earn an A, her spot on the swim team will go to Vivian—a beautiful mermaid with shimmery skin. Cora wants to be on the team, but she is easily distracted. Can she learn to study her spelling words and keep her spot on the swim team?

Told in diary form with illustrations on every page, Third Grade Mermaid allows Cora’s struggles with spelling to come to life. The plot focuses on Cora’s struggle with spelling as well as Cora’s attempt to hide her new pet, a gigantic shrimp, from her parents. The plot jumps from topic to topic, which may be difficult for new readers.  As Cora writes in her diary, she crosses out misspelled words and puts the correct spelling in bold print.

Cora’s personality comes to life through the illustrations and her storytelling. However, Cora has several qualities that are not worth emulating. Cora tends to complain a lot, and she is overly focused on other mermaids’ beauty. She believes that “If you’re pretty enough, you just get handed EVERYTHING, including a whole school of fish that follow every flip and flop of your fancy fins.” When Cora hides her pet, her brother has an allergic reaction to shellfish. Cora lies about having a giant shrimp in the house. Later, she gets tired of having a giant shrimp follow her around and tries to ditch him.

Even when Cora’s mother spends “half the morning” arguing with the teacher so Cora can get back on the swim team, Cora is not thankful. Instead, Cora is upset that she had to stay in at recess and talk to the teacher and coach about how to get back on the team. Throughout the entire story, Cora does not study because she either gets distracted or falls asleep. Despite this, at the end of the story she does earn an A on her test, because “I used them to tell my own story. Better than that, I LIVED them.”