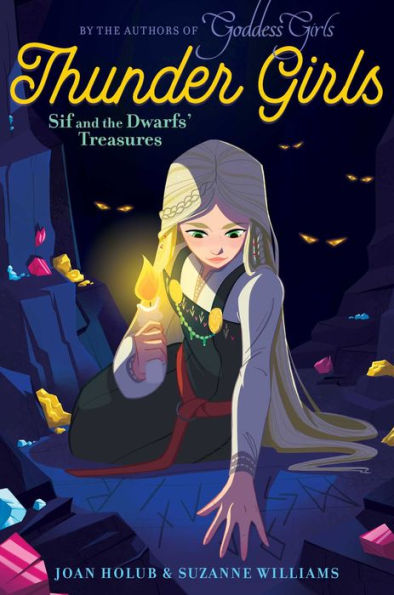 Twelve-year-old Sif attends Asgard Academy, but she’s keeping important secrets from her podmates. No one knows that her magical hair allows the wheat crop to grow. When mischievous Loki cuts her hair in a horrible prank, Sif must rely on her podmates and Loki for help.

Sif has a prophetic dream that gives her a hint on how to solve the problem. Sif and Freya must convince Loki to go to Ivaldi’s sons, dwarves who are skilled blacksmiths. Loki must strike a bargain with them to help Sif get her hair back. An overconfident Loki strikes a deal with the blacksmiths, and as part of the deal he could lose his head—literally.

To make things worse, there are rumors of a looming attack that could hit Asgard Academy. Sif is afraid that Ragnarok, or doomsday, might be about to begin. Is there any way Sif can save the wheat crops and her beloved school?

Fans of Goddess Girls will enjoy this new series which focuses on Norse Mythology. Sif is a relatable character who has a difficult time overcoming her embarrassing insecurities. She doesn’t want anyone to know that she is a seer—or that she has a difficult time reading. As Sif gets to know her podmates better, she realizes that no one, not even a goddess girl, is perfect.

Sif and the Dwarfs’ Treasures has many positive messages that pertain to younger readers. Odin has created the school in order to get people from different worlds to interact. “[He] wished them to understand and appreciate everyone’s differences.” As Sif learns more about her roommates, she realizes the importance of working together. Sif also knows that looks do not define a person’s (or a god’s) character. Even though “many girls found Loki cute,” Sif knows that “a person’s behavior, not his appearance, was what made him attractive.”

Readers will enjoy learning about Sif, who is a well-rounded and caring goddess. Sif and the Dwarfs’ Treasures has interesting characters and actions, humorous puns, and a sprinkle of crushing moments that will entertain readers. Although many of the characters appeared in Freya and the Magic Jewel, the stories do not need to be read in order. Each book is told from a different goddess’s point of view and allows the reader to see that even goddesses need help from others.

Readers who are unfamiliar with Norse mythology will want to read the glossary first. The story introduces Norse mythology in a kid-friendly way, while still staying true to the original stories. Sif and the Dwarfs’ Treasures uses a relatable character to embed important life lessons in an entertaining story that readers will love. Readers will eagerly look for the next book in the series, Idun and the Apples of Youth.