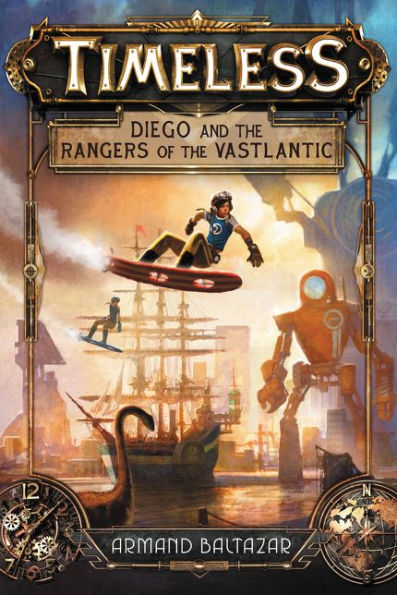 In Diego’s world, conflict is ever-present. Not everyone believes that kids from different eras of history and from different cultures should interact. Some still wish for the world that they came from before time collided.

When Diego’s father, a New Chicago’s top engineer, is taken by rebels, Diego vows to help free his father. Diego thinks the key is to build bigger, stronger weapons. However, when he and three others accidentally end up on a pirate ship, Diego’s beliefs are challenged.

Diego and the Rangers of the Vastlantic gives the reader a glimpse of the struggles others faced during different eras, which gives the story interest. The story doesn’t just focus on how boys and girls often do not understand each other, but also how people from different cultures can also have conflict.

Although the story is full of action and has an epic battle scene, the violence is not described in great detail. Instead, sights and sounds are left to the reader’s imagination. Stunning illustrations enhance the story and help bring the new world to life. Diego and the Rangers of the Vastlantic is a story about friendship, family, and seeing others in a new way. In the end, Diego learns that powerful weapons are not the key to keeping his world safe.