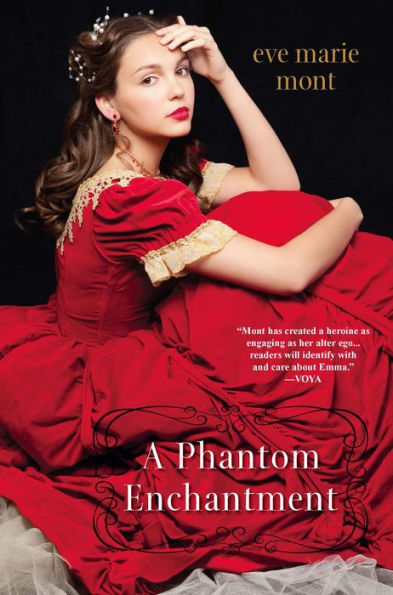 Emma has been looking forward to spending her senior year of high school in Paris. When she arrives, she and her friend Elise are excited to learn the culture and participate in an Opera writing competition.  Then Flynn and Owen show up in Paris and the conflict heats up.

Then Emma’s boyfriend, Gray, goes missing and is presumed dead. Emma travels through a mirror and is able to talk to Gray, but the Gray in her dreams is dangerous and depressing. In an attempt to get over Gray, Emma begins spending more time with Owen. Soon Emma must face Elise’s jealousy and her own growing attraction to Owen.

As Emma’s dreams continue to frighten her, she decides to stay away from the mirror, but that doesn’t stop her from feeling Gray’s presence. And then a series of accidents makes Emma wonder if Gray’s Ghost wants revenge.

Although A Phantom Enchantment takes place in Paris, the setting does not add to the story. So much of the story revolves around Emma and her American friends, that the French culture takes a backseat to the teen drama. Even though Emma and Elise are in a Paris boarding school, none of the French students make more than a ripple in the story.

Even though the story parallels the Phantom of the Opera, this also does not add to the enjoyment of the story. By the time Emma’s story reaches book three, both her story and conflict feel old. Thus, reading A Phantom Enchantment became a chore, and Emma’s story came to a welcome end.