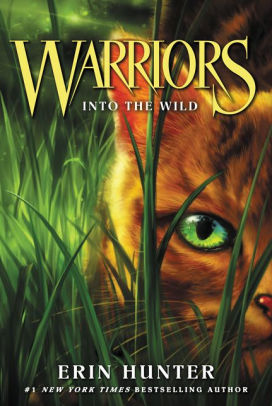 Four Clans of wild cats share the forest. Their ancestors created the Warrior Code, an unbreakable law of the forest that all warrior cats must follow. But the warrior code has been threatened, and because of it, ThunderClan cats are in danger, and warriors are dying mysterious deaths. As the division between the clans widens, Bluestar is desperate to discover the truth behind the deaths and save her clan.

As tensions rise, a new cat appears. Rusty is just a typical pet who lives with the twolegs, but he dreams about living in the forest. When he meets ThunderClan, he is eager to join them, but first, he must fight to win acceptance by a clan that doesn’t want him. Will he be allowed to join ThunderClan? Can Rusty prove himself a brave warrior, or will his kittypet origins be his downfall?

Readers that pick up Into the Wild will jump into a wild forest that is ruled by cats. The fast-paced story shows the world from the cats’ point of view and uses realistic cat terminology. The cats’ world is beautifully described and has strong male and female characters. What truly makes this book (and series) worth reading again and again, is the character development and the surrounding drama. Fluent readers will adore Into the Wild because of the exciting battles, tense drama, and wide cast of characters. The cats often battle, and although the fighting is not gory, some of the evil cats scheme to raise their status by killing, manipulating, and deceiving others. Such actions are always portrayed in a negative light.

Readers will especially fall in love with Firepaw and his friends as they watch them grow up in the beloved ThunderClan. Into the Wild is more than a fun read, it teaches lessons of love, acceptance, and the merits of hard work. Readers will see how the different clans act like people; this gives readers an opportunity to see how others react to cultural differences and prejudice. Readers will learn that you cannot judge someone by where they came from. Get ready to read the rest of the Warriors series, because there will be no turning back once Into the Wild sinks its claws into you.