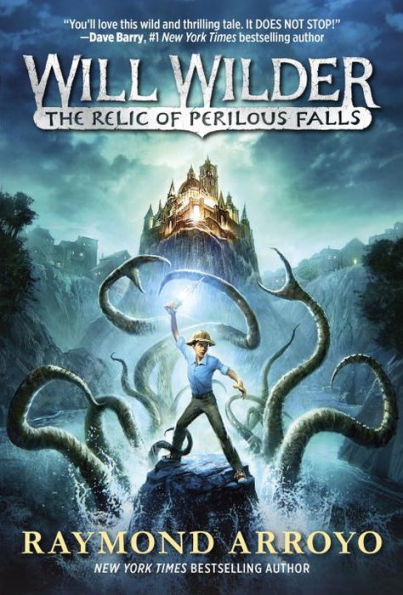 Will Wilder didn’t mean to unlock his otherworldly gift, but that is exactly what happens when Will “borrows” a sacred relic believed to have protected the town of Perilous Falls for nearly a century. Even though Will’s intentions are good, the impulsive twelve-year-old unwittingly awakens an ancient evil that endangers all of Perilous Falls.

As boats sink and hideous creatures crawl from the rising waters, it is up to Will to confront a nightmarish enemy and set things right before it is too late. Along with his sweet—if lethal—great-aunt Lucille (the curator of a museum of supernatural artifacts), Will proves that the actions of one twelve-year-old boy can change the world.

In The Relic of Perilous Falls, Will goes into a vast underground chamber and must solve riddles to advance to the next room. Similar to Indiana Jones, Will must avoid traps in order to find the treasure. In this case, Will finds a religious relic that can heal people. However, Will doesn’t complete his task alone. Will’s two friends help him solve the riddles in the first two chambers. When Will finds the relic, he abandons his two friends, leaving them alone to fight demonic creatures that are similar to crocodiles.

The story blends humor, action, and adventure to create a fast-paced middle school novel. While these elements will engage readers, readers unfamiliar with the Bible may be confused by the Biblical references. Not only is a Catholic priest one of the main characters, but the relics are from Biblical times. They contain healing properties because “these relics are the remains of holy lives. Each and every bone or scrap of clothing is a physical connection to someone now in the presence of God.”

Like many middle schoolers, Will can be snarky and is often disobedient. Will’s flaws will make him relatable to readers and lead to some humorous scenes. One negative aspect of the story is Will’s parents, who argue often and disagree on how to punish Will. This negative relationship is balanced out by Will’s siblings, who play a minor, though important role. Also, Will’s elderly aunt shows that an older woman can still be physically strong and contribute to the world.

The story’s fast pace and surprises will keep advanced readers entertained until the very end. However, struggling readers may have a difficult time with the large cast of characters, the complicated plot, and the Biblical references. The Relic of Perilous Falls blends Biblical stories into a modern setting, much like the Percy Jackson series does with Greek mythology. In the end, Will is able to defeat evil with the help of other people. However, the conclusion leaves many questions unanswered, which will have readers reaching for the second installment in the series, The Lost Staff of Wonders. Readers looking for other action-adventure stories similar to The Relic of Perilous Falls will also enjoy the Addison Cooke Series by Jonathan W. Stokes.